The A-10 Thunderbolt is also known as the Warthog, the ‘flying gun’ and the Tankbuster. The aircraft was used extensively during Operation Desert Storm, in support of Nato operations in response to the Kosovo crisis, in Operation Enduring Freedom in Afghanistan and in Operation Iraqi Freedom.

The A-10 is a high-survivability and versatile aircraft, popular with pilots for the ‘get home’ effectiveness.

The mission of the aircraft is ground attack against tanks, armoured vehicles and installations, and close air support of ground forces.

The A-10 is suitable for operation from forward air bases, with short take-off and landing capability. The aircraft has a long range (800 miles), high endurance and can loiter in the battle area.

The manoeuvrability at low speed and low altitude (below 1,000ft) allows accurate and effective targeting and weapon delivery over all types of terrain.

“The A-10 Thunderbolt is also known as the Warthog.”

The first flight of the A-10 was in May 1972, and a total of 713 aircraft were produced. The production of A-10 aircraft came to an end in 1984. Originally manufactured by Fairchild, since 1987 the prime contractor for the A-10 has been Northrop Grumman, which carries out support and structural upgrade programmes from the Integrated Systems and Aerostructures Divisions at Bethpage, New York and at St Augustine in Florida.

In June 2007, Boeing was awarded a $2bn contract for the A-10 wing replacement programme. Boeing will supply 242 replacement wing sets by 2018.

In September 2009, the US Air Force awarded two contracts worth $4.2m to Boeing for modernising its fleet of 365 A-10 Thunderbolt II aircraft for a period of three to 18 months. The contract was awarded as part of the total $1.6bn A-10 Thunderbolt life-cycle programme support (TLPS) contract.

Boeing received a $999m contract from the US Air Force for delivering sustainment work on A-10 Thunderbolt II aircraft, in August 2019. The 11-year contract will involve managing the production of 112 new A-10 wing assemblies and 15 wing kits.

The two contracts included A-10 Aircraft Structural Integrity Program (ASIP) which involves providing engineering services to the aircraft and upgraded data transfer unit (UDTU) which include trade study analysis and operational assessment / proof of concept. Both the contracts aim at upgrading the aircraft with avionics architecture to improve memory and data capability.

The precision engagement upgrade programme for the A-10 includes enhanced precision target engagement capabilities, which will allow the deployment of precision weapons such as JDAM (joint direct attack munition) and wind-corrected munitions dispenser (WCMD), as well as enabling an extension of the aircraft’s service life to 2028.

Lockheed Martin Systems Integration-Owego is prime contractor for the program. First flight of the upgraded A-10C was in January 2005. A contract for low-rate initial production (LRIP) of 72 units was awarded in March 2005. The first was delivered to Baltimore Air National Guard in August 2006.

A contract for full-rate production of 107 units was placed in August 2006. The A-10C achieved initial operating capability in August 2007. 100 A-10s had been upgraded by January 2008. The A10C began operational deployment in Iraq in September 2007. 356 A-10 aircraft have been upgraded in the contract.

In February 2004, Lockheed Martin was awarded a contract for the integration of the Sniper XR targeting pod on the A-10 as part of the PE programme. Sniper XR includes mid-wave FLIR (forward-looking infrared), dual mode laser, CCD-TV, laser spot tracker and IR marker.

The single-seat cockpit is protected by all-round armour, with a titanium ‘bathtub’ structure to protect the pilot that is up to 3.8cm thick. The cockpit has a large bulletproof bubble canopy, which gives good all-round vision.

The cockpit is equipped with a head-up display, which is used for targeting and weapon aiming, a Have-Quick secure radio communications system, inertial navigation and a tactical air navigation (TACAN) system.

“The single-seat cockpit is protected by all-round armor, with a titanium ‘bathtub’ structure.”

Lockheed Martin has begun delivery of 21 USAF A-10 aircraft with the embedded global positioning system / inertial navigation system (EGI), which pinpoints the exact location of the aircraft. The aircraft are also to be fitted with BAE Systems terrain profile matching systems (TERPROM).

The pilot is equipped with night-vision goggles and also the infrared imaging display of the Maverick AGM-65.

The aircraft has 11 stores pylons, providing an external load capacity of 7,260kg. There are three pylons under the fuselage and the loads can be configured to use either the centre-line pylon or the two flanking fuselage pylons.

For weapon guidance, the aircraft can be fitted with Pave Penny laser guidance / electronic support measures, pod installed on the starboard fuselage pylon. Each wing carries four stores pylons: three outboard and one inboard of the wheel fairing.

The A-10 can carry up to ten Maverick air-to-surface missiles. The Raytheon Maverick AGM-65 missile uses a variety of guidance systems, including imaging infrared guidance and warheads, including a high-penetration, 57kg conical-shaped charge warhead. Range is more than 45km. The A-10 can also carry the Sidewinder air-to-air missile, which is an all-aspect short-range missile with maximum speed over Mach 2.

The A10 is capable of deploying a wide range of ordnance: for example, the LDGP mk82 226kg, 500lb general-purpose bombs, BLU-1 and BLU-27/B Rockeye II cluster bombs and the cluster bomb unit CBU-52/71.

The aircraft is armed with a General Dynamics GAU-8/A Avenger 30mm cannon, mounted in the nose of the aircraft.

Using the cannon, the A-10 is capable of disabling a main battle tank from a range of over 6,500m. The cannon can fire a range of ammunition, including armour-piercing incendiary rounds (API) weighing up to 0.75kg, or uranium-depleted 0.43kg API rounds.

The two non-afterburning turbo fan engines, TF34-GE-100, supplied by General Electric, each supply 9,065lb thrust. The location of the engines, high on the fuselage, allows the pilot to fly the aircraft fairly easily with one engine inoperable.

The A-10 has been flown exclusively by the United States Air Force (USAF) and its Air Reserve components, the Air Force Reserve Command (AFRC) and the Air National Guard (ANG). As of 2017, 282 A-10C aircraft are reported as operational, divided as follows: 141 USAF, 55 AFRC, 86 ANG. 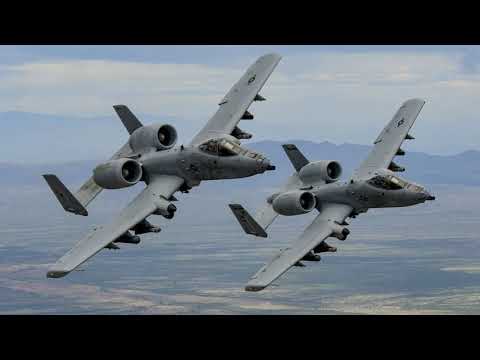 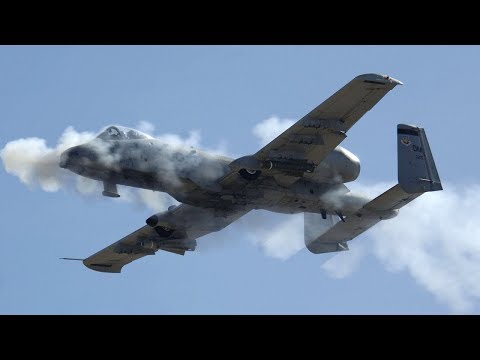 One thought on “A-10 Thunderbolt II”