The AAV7A1 family currently serves as amphibious troop transport vehicles for the United States Marine Corps (USMC). It is used to ground surface assault components and equipment of the landing forces in a single lift from assault ships during amphibious operations. It also supports mechanised operations ashore.

The AAV7A1 of the USMC are often referred to as Amtracks.

“The AAV7A1 family currently serves as amphibious troop transport vehicles for the USMC.”

The AAV7A1 first entered service as LVT-7 to replace the LVT-5 in 1972. The LVT-7 vehicle was converted into the improved AAV7A1 vehicle under the LVT-7 Service Life Extension Program completed between 1983 and 1986.

A new advanced engine, transmission and weapons system were added and overall maintainability of the vehicle was improved. The upgraded vehicles were originally called LVT-7A1, but renamed as AAV7A1 by the USMC in 1984.

The lethality, survivability and communications of the vehicle were improved under Product Improvement Programme (PIP) implemented during 1987-1999. The AAV7A1 Reliability, Availability and Maintainability / Rebuild to Standard (RAM/RS) Programme replaced the engine and suspension with M2 Bradley Fighting Vehicle (BFV) components modified for the AAV. The RAM/RS programme, commenced in 1999 was concluded in 2007.

The AAV7A1 features a vessel-shaped hull. The headlight clusters are housed in a square recess. The improved versions are fitted with new instrument panel, a night vision device and a new ventilation system.

The AAVC7A1 Command Vehicle lacks a turret. The communications equipment is accommodated in the cargo space of the vehicle. This version is equipped with modern communication systems, supporting arms and logistical support units.

The AAVP7A1 Personnel Vehicle features a turret fitted with a M2HB .50 calibre heavy machine gun and an Mk19 40mm automatic grenade launcher. It is equipped with four crew radios and an AN/VIC-2 intercom system. The variant can carry a driver, a crew chief / vehicle commander (gunner) and rear crewman, and 25 combat equipped Marines. The P7 can be modified to carry the Mk 154 Mine Clearance Line Charge kit.

“The AAV7A1 of the USMC are often referred to as Amtracks.”

The AAVR7A1 Recovery Vehicle is not equipped with a turret. The R7 features a crane, capacity recovery winch, cutting, welding and other portable maintenance equipment to provide support maintenance to vehicles in the field. It is used to recover similar or smaller size vehicles.

The weapon station allows the gunner to engage targets within 1,500m range and to traverse a full 360° at a speed of 45° per second.

The AAV7A1 is also installed with auto fire suppression and NBC protection system for enhanced survivability.

The AAV7A1 is powered by a 400hp turbocharged multi-fuel, liquid cooled V-8 diesel engine coupled to a HS-400-3A1 automatic transmission integrating shifting, steering and braking functions in one unit.

The two 14,000gpm water jet pumps provide a cruising speed of 9.7km/h on the sea and the ability to negotiate 10ft plunging surfs flowing towards sea or shore.

The flat track torsion bar suspension system with heavy-duty shock absorbers provides excellent mobility over all terrains at a top speed of 72.4km/h.

Many P7s have been modified to carry the Mk 154 MCLC, or Mine Clearance Line Charge. The MCLC kit can fire three linear demolition charges to breach a lane through a minefield. MCLCs were used in the 1991 Persian Gulf War and again in Operation Iraqi Freedom in 2003.

In the 1970s, the US Army used an LVTP-7 as the basis for their Mobile Test Unit (MTU), a ground-based high-energy anti-aircraft laser. After several successful test firings at Redstone Army Arsenal, the laser was reportedly transferred to NASA. 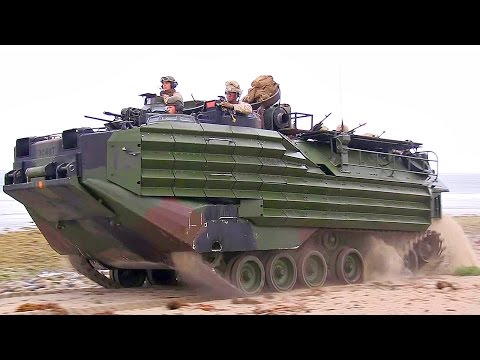 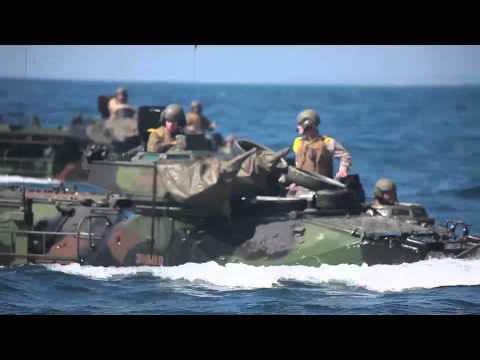 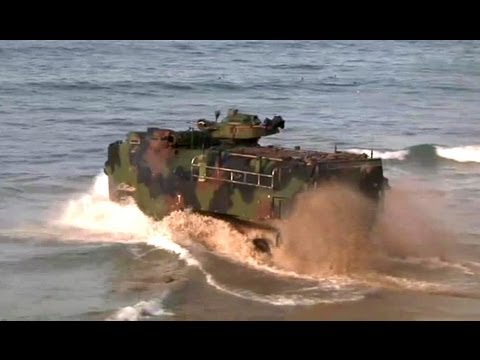