The Lockheed AC-130 gunship is a heavily armed, long-endurance, ground-attack variant of the C-130 Hercules transport, fixed-wing aircraft. It carries a wide array of ground attack weapons that are integrated with sophisticated sensors, navigation, and fire-control systems. Unlike other modern military fixed-wing aircraft, the AC-130 relies on visual targeting. Because its large profile and low operating altitudes of approximately 7,000 feet (2,100 m) make it an easy target, its close air support missions are usually flown at night.

The airframe is manufactured by Lockheed Martin, while Boeing is responsible for the conversion into a gunship and for aircraft support. Developed during the Vietnam War as “Project Gunship II”, the AC-130 replaced the Douglas AC-47 Spooky, or “Gunship I”. The sole operator is the United States Air Force, which uses the AC-130U Spooky and AC-130W Stinger II variants for close air support, air interdiction, and force protection, with the upgraded AC-130J Ghostrider entering service. Close-air-support roles include supporting ground troops, escorting convoys, and urban operations. Air-interdiction missions are conducted against planned targets and targets of opportunity. Force-protection missions include defending air bases and other facilities. AC-130Us are based at Hurlburt Field, Florida, while AC-130Ws are based at Cannon AFB, New Mexico; gunships can be deployed worldwide. The squadrons are part of the Air Force Special Operations Command (AFSOC), a component of the United States Special Operations Command (SOCOM).

The AC-130 has an unpressurized cabin, with the weaponry mounted to fire from the port side of the fuselage. During an attack, the gunship performs a pylon turn, flying in a large circle around the target, therefore being able to fire at it for far longer than in a conventional strafing attack. The AC-130H Spectre was armed with two 20 mm M61 Vulcan cannons, one L60 Bofors 40 mm cannon, and M137 105 mm cannon and M37 recoil mechanism from the M102 howitzer; after 1994, the 20 mm cannons were removed. The upgraded AC-130U Spooky has a single 25 mm GAU-12 Equalizer cannon in place of the Spectre’s two 20 mm cannons, an improved fire-control system, and increased ammunition capacity. The new AC-130J was based on the MC-130J Commando II special-operations tanker. The AC-130W Stinger II is a modified C-130H with upgrades including a precision strike package.

During the Vietnam War, the C-130 Hercules was selected to replace the Douglas AC-47 Spooky gunship (Project Gunship I) to improve mission endurance and increase capacity to carry munitions. Capable of flying faster than helicopters and at high altitudes with excellent loiter time, the use of the pylon turn allowed the AC-47 to deliver continuous, accurate fire to a single point on the ground.

In 1967, JC-130A 54-1626 was selected for conversion into the prototype AC-130A gunship (Project Gunship II). The modifications were done at Wright-Patterson Air Force Base by the Aeronautical Systems Division. A direct-view night-vision telescope was installed in the forward door, an early forward-looking infrared device was placed in the forward part of the left wheel well, with miniguns and rotary cannons fixed facing down and aft along the left side. The analog fire-control computer prototype was handcrafted by RAF Wing Commander Tom Pinkerton at the USAF Avionics Laboratory at Wright-Patterson AFB. Flight testing of the prototype was performed primarily at Eglin Air Force Base, followed by further testing and modifications. By September 1967, the aircraft was certified ready for combat testing and was flown to Nha Trang Air Base, South Vietnam for a 90-day test program. The AC-130 was later supplemented by the AC-119 Shadow (Project Gunship III), which later proved to be underpowered.

Seven more warplanes were converted to the “Plain Jane” configuration like the AC-130 prototype in 1968, and one aircraft received the “Surprise Package” refit in 1969. The Surprise Package upgrade included the latest 20 mm rotary autocannons and 40 mm Bofors cannon, but no 7.62 mm close-support armament. The Surprise Package configuration served as a test bed for the avionic systems and armament for the AC-130E. In 1970, 10 more AC-130As were acquired under the “Pave Pronto” project. In the summer of 1971, Surprise Package AC-130s were converted to the Pave Pronto configuration and assumed the new nickname of “Thor”. Conversion of C-130Es into AC-130Es for the “PAVE Spectre” project followed. Regardless of their project names, the aircraft were more commonly referred to by the squadron’s call sign, Spectre.

In 2007, AFSOC initiated a program to upgrade the armament of AC-130s. The test program planned for the 25 mm GAU-12/U and 40 mm Bofors cannon on the AC-130U gunships to be replaced with two 30 mm Mk 44 Bushmaster II cannons. In 2007, the Air Force modified four AC-130U gunships as test platforms for the Bushmasters. These were referred to as AC-130U Plus 4 or AC-130U+4. AFSOC, however, canceled its plans to install the new cannons on its fleet of AC-130Us. It has since removed the guns and reinstalled the original 40 mm and 25 mm cannons and returned the planes to combat duty. Brigadier General Bradley A. Heithold, AFSOC’s director of plans, programs, requirements, and assessments, said on 11 August 2008 that the effort was canceled because of problems with the Bushmaster’s accuracy in tests “at the altitude we were employing it”. Also, schedule considerations drove the decision, he said.

Plans were made to possibly replace the 105 mm cannon with a breech-loading 120 mm M120 mortar, and to give the AC-130 a standoff capability using either the AGM-114 Hellfire missile, the Advanced Precision Kill Weapon System (based on the Hydra 70 rocket), or the Viper Strike glide bomb.

In 2010, the Air Force awarded L-3 Communications a $61 million contract to add precision strike packages to eight MC-130W Combat Spear special-mission aircraft to give them a gunship-like attack capability; such-equipped MC-130Ws are known as Dragon Spears. AFSOC is arming these aircraft to relieve the high operational demands on AC-130 gunships until new AC-130Js enter service. The MC-130W Dragon Spear was renamed AC-130W Stinger II in 2011. The precision strike packages consist of a 30 mm gun and several precision guided munitions. Rails are mounted on the outboard pylon of the wing for four Hellfire missiles, SDBs, or SDB IIs under each. Ten Common Launch Tubes (CLTs) are mounted on the rear ramp to fire Griffin A missiles; additional missiles are stored in the aircraft that can be reloaded in flight. CLTs are able to fire other small munitions able to fit inside the 6 in (15 cm)-diameter, 48 in (1.2 m)-long tubes.

The Air Force launched an initiative in 2011 to acquire 16 new gunships based on newly built MC-130J Combat Shadow II special-operations tankers outfitted with a “precision strike package” to give them an attack capability, requesting $1.6 billion from fiscal years 2011 through 2015. This would increase the size of the gunship fleet to 33 aircraft, a net increase of eight after the planned retirement of eight aging AC-130Hs. The first aircraft would be bought in fiscal 2012, followed by two in fiscal 2013, five in fiscal 2014, and the final eight in fiscal 2015. The decision to retain the C-130 came after funding for 16 C-27Js was removed from the fiscal 2010 budget.

The Air Force decided to add a 105 mm cannon to the AC-130J in addition to the 30 mm cannon and smart bombs, the shells being more accurate and cheaper than dropping SDBs. AFSOC is actively pursuing a directed-energy weapon onboard the AC-130J in place of the 30mm gun by 2022, similar to the previous Advanced Tactical Laser program. It is to produce a beam of up to 120 kW, or potentially even 180–200 kW, weigh about 5,000 lb (2,300 kg), defensively destroy antiaircraft missiles, and offensively engage communications towers, boats, cars, and aircraft. However, laser armament may only be installed on a few aircraft rather than the entire AC-130J fleet; the laser will be mounted on the side in place of the 30 mm cannon. Other potential additions include an active denial system to perform airborne crowd control, and small unmanned aerial vehicles from the common launch tubes to provide remote video feed and coordinates to weapons operators through cloud cover. Called the Tactical Off-board Sensor (TOBS), the drones would be expendable and fly along a programmed orbit to verify targets the aircraft cannot see itself because of bad weather or standing off from air defenses. AFSOC will initially use the Raytheon Coyote small UAV for the TOBS mission, as it is an off-the-shelf design with a one-hour endurance, but plans to fulfill the role with a new drone capable of a four-hour endurance by 2019.

The Air Force was also interested in acquiring a glide bomb that can be launched from the common launch tubes capable of hitting ground vehicles traveling as fast as 120 km/h (70 mph) while above 10,000 ft (3,000 m). In June 2016, Dynetics was awarded a contract by SOCOM to integrate its tactical munition onto the AC-130. Designated the GBU-69/B Small Glide Munition, the weapon weighs 27 kg (60 lb) and is armed with a 16 kg (35 lb) blast-fragmentation warhead that can detonate by direct impact or at a selected height; despite being smaller, being unpowered allows for its warhead to be heavier than those on the Hellfire and Griffin A missiles, 9 kg (20 lb) and 5.9 kg (13 lb), respectively. Guidance is provided by a GPS receiver with antispoofing software and four Distributed Aperture Semiactive Laser Seeker apertures adapted from the WGU-59/B APKWS for terminal guidance.[46][47][48] Approval for fielding occurred in early 2017. Dynetics was awarded a contract to deliver an initial batch of 70 SGMs in June 2017, with plans to buy up to 1,000. The SGM can travel 20 mi (32 km).

As of 2018, AC-130 gunships have been providing close air support for special operators for 50 years. Although the aircraft have been kept relevant through constant upgrades to their weaponry, sensor packages, and countermeasures, they are not expected to be survivable in future nonpermissive environments due to their high signatures and low airspeeds. Military analysts, such as the Center for Strategic and Budgetary Assessments, have suggested that AFSOC invest in more advanced technologies to fill the role to operate in future contested combat zones, including a mix of low-cost disposable unmanned and stealthy strike aircraft.

The AC-130 is a heavily armed, long-endurance aircraft carrying an array of antiground-oriented weapons that are integrated with sophisticated sensors, navigation, and fire-control systems. It is capable of delivering precision firepower or area-saturation fire over a target area over a long period of time, at night, or in adverse weather. The sensor suite consists of a television sensor, infrared sensor, and radar. These sensors allow the gunship to visually or electronically identify friendly ground forces and targets in most weather conditions.

The AC-130U is equipped with the AN/APQ-180, a synthetic aperture radar, for long-range target detection and identification. The gunship’s navigational devices include inertial navigation systems and a global positioning system. The AC-130U employs technologies developed in the 1990s, which allow it to attack two targets simultaneously. It has twice the munitions capacity of the AC-130H. Although the AC-130U conducts some operations in daylight, most of its combat missions are conducted at night. The AC-130H’s unit cost is US$132.4 million, and the AC-130U’s cost is $190 million (fiscal 2001 dollars).

During the Vietnam War era, the various AC-130 versions following the Pave Pronto modifications were equipped with a magnetic anomaly detector system called Black Crow (designated AN/ASD-5), a highly sensitive passive device with a phased-array antenna located in the left-front nose radome that could pick up localized deviations in the Earth’s magnetic field normally used to detect submerged submarines. The Black Crow system was slaved into the targeting computers of the AC-130A/E/H, enabling the detection of the unshielded ignition coils of North Vietnamese trucks hidden under dense jungle foliage along the Ho Chi Minh Trail. It could also detect hand-held transmitter signals of air controllers on the ground to identify and locate targets.

The PGM-38/U enhanced 25 mm high-explosive incendiary round was created to expand the AC-130U gunships’ mission in standoff range and survivability for its 25 mm GAU-12/U gun. This round is a combination of the existing PGU-25 HEI and a M758 fuze designated as FMU-151/B to meet the MIL-STD-1316. The FMU-151 has an improved arming delay with multisensitive range. 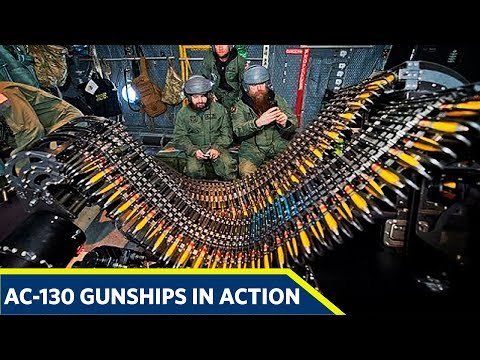 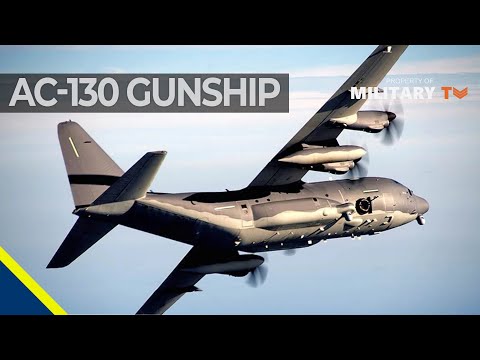 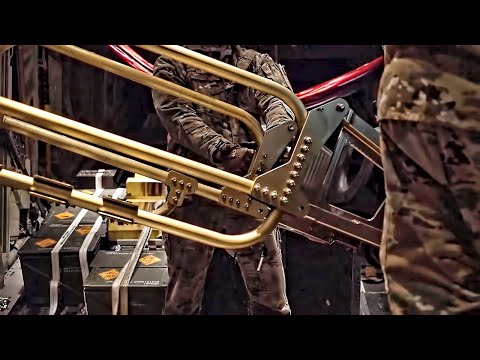 One thought on “AC-130J Ghostrider”