The America Class amphibious assault ships are being built by Northrop Grumman Shipbuilding for the US Navy. These ships are intended to replace the Tarawa Class amphibious assault ships. Previously known as LHA (R), the first ship, USS America (LHA-6) was delivered in April 2014 and commissioned in October 2014. USS America is the fourth ship in the US Navy to bear the name.

In June 2007, the US Navy signed a $2.4bn fixed-price incentive contract with Northrop Grumman for the detail design and construction of the amphibious assault ship, LHA 6. The keel was laid down at Northrop Grumman’s Ingalls shipyard in July 2009.

In June 2010, Northrop Grumman was awarded a $175m advance procurement contract for LHA 7 by the US Navy. These funds will be used for the procurement of long-lead time materials and major equipment for the new vessel and to execute initial design and planning. The work is being carried out at the Gulf Coast facilities of the company. LHA-7, named USS Tripoli, was laid down in June 2014 and her commission is planned in 2018.

In June 2016, the US Navy signed a $272.47m contract with Ingalls Shipbuilding for the construction of LHA 8. The contract also includes options which will bring the value of contract to $3.1bn, when exercised.

Based on the hull design of USS Makin Island (LHD-8), USS America (LHA-6) is equipped with a gas turbine propulsion system. The design incorporates several modifications to complement aviation operations and support activities. The well deck has been converted into an extended hangar deck and includes two wide and high bay areas. An overhead crane is installed in each bay area for aircraft maintenance.

“The America Class ships are being built by Northrop Grumman Shipbuilding.”

The America Class ship has an overall length of 257.2m and a beam of 32.3m. The displacement of the vessel is 44,971t. The hybrid propulsion system provides a maximum speed of more than 20k. The ship can accommodate 1,204 crew and 1,871 troops.

The vessel has hangar large enough to accommodate aircraft movement. The ship also has increased aviation fuel capacity, and storage for aviation parts and support equipment. With its 45,000t displacement and complement of strike fighters, it can serve in the small carrier role.

“The America Class ships are fitted with the ship self-defence system developed by Raytheon.”

The SSDS receives data from individual radars, the electronic support measures system (radar warning receiver) and the identification-friend or foe system. It forms a composite track from this data which is used to identify, prioritise and track threats.

The ship is powered with hybrid mechanical-electric propulsion system. The system consists of two LM2500+ gas turbines and two 5,000hp auxiliary propulsion motors. Each gas turbine is rated at 35,290shp and provides speeds in excess of 22kt. 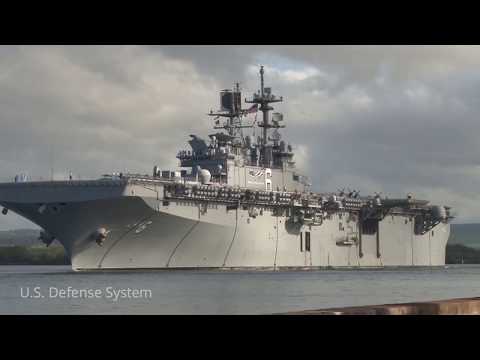