The first Arleigh Burke Class Destroyer was commissioned in 1991. The contracts for the destroyers were split between the Northrop Grumman Ship Systems (formerly Litton Ingalls Shipbuilding) (28 ships) based in Pascagoula, Mississippi, and the General Dynamics subsidiary, Bath Iron Works, based in Maine (34 ships).

The first 21 destroyers (DDG51-DDG71) are categorised as Flight I, the next seven (DDG72-DDG78) as Flight II, and ships starting from Jack H Lucas (DDG 125) are classified as Flight III.

The revised Flight IIA ships entered production in late 1997. 39 were commissioned and are in active service.

In November 2019, separated from Northrop Grumman in 2011, Huntington Ingalls Industries (HII) laid and authenticated the keel of USS Jack H Lucas (DDG 125), the first Flight III Arleigh Burke-class destroyer. The US Navy awarded a contract to General Dynamics for the construction of USS Harvey C Barnum Jr (DDG 124), the last ship in the Flight IIA configuration, in March 2016. The first steel for DDG 124 was cut in May 2018.

In its FY2020 budget request, the US Navy requested Congress to approve funding for the acquisition of three additional Arleigh Burke-class destroyers. The planned procurement would take the number of ships in the DDG 51 class to 85.

In April 2018, the US Navy unveiled plans to modernise the existing destroyers to keep them in service for ten additional years. The projected ship service life would increase to 45 from 35 or 40.

Michael Murphy (DDG 112) was to be the last of the 62 Arleigh Burke destroyers. Originally planned to procure a fleet of 32 Zumwalt-class destroyers, the US Navy truncated the acquisition programme to three ships after recognising the need for additional Arleigh Burke-class ships to counter growing ballistic missile and anti-ship missile threats.

“Vital areas are protected by two layers of steel and 70t of Kevlar armour.”

Timken secured a contract from the US Department of Defense to supply Philadelphia Gear main reduction gears (MRGs) for the next generation of Arleigh Burke DDG 51 class ships in February 2016.

The US Navy awarded two contracts with a combined value of $9.29bn to HII and Bath Iron Works (BIW) for the construction of ten Flight III DDG 51 destroyers in September 2018. HII will build six destroyers and BIW will construct the remaining four. The construction of the ships is taking place between 2018 and 2022.

In December 2018, the US Navy awarded a contract modification to BIW to construct an additional Arleigh Burke-class destroyer.

The entire ship (except the two aluminium funnels) is made from steel with vital areas protected by two layers of steel and 70t of Kevlar armour.

The destroyer has a platform for rearming and refuelling a LAMPS III SH-60B / F helicopter with ASW capabilities but the ship is unable to accommodate a helicopter of its own without hangars. This is the first US Navy class to be fitted out with anti-NBC warfare protection.

The Aegis system has a federated architecture with four subsystems, AN / SPY-1 multifunction radar, a command and decision system (CDS), an Aegis display system (ADS), and the weapon control system (WCS).

The CDS receives data from ship and external sensors via satellite communications and provides command, control and threat assessment. The WCS receives engagement instruction from the CDS, selects weapons and interfaces with the weapon fire control systems.

The Aegis upgrade, Baseline 7.1, was certified by the USN in September 2005 onboard USS Pinkney (DDG 91). The upgrade includes a new radar, AN / SPY-1D (V), that has enhanced electronic countermeasures and more effective capability in littoral environments. Baseline 7.1 is based on commercial-off-the-shelf (COTS) computer architecture. The upgrade trials in March 2003 included live firings of the ESSM.

USS John Finn was the first new-build to be equipped with Baseline 9. The combat systems upgrade in 2015 involved the activation of the Aegis Baseline 9 in USS Arleigh Burke, the lead ship in the class. The Flight III configuration will include major enhancements to enable the ship to simultaneously perform both anti-air warfare and anti-ballistic missile operations.

The ships in the Flight III class will feature the advanced AN/SPY-6(V) radar and Aegis Baseline 10 upgrade.

Raytheon was awarded a $250m contract to build SPY-6 radar ship sets for installation onboard the Flight III destroyers in December 2019.

The system received US Navy certification for full deployment in September 2006. The work on 33 destroyers was completed by 2019 and the vessels, as well as three Ticonderoga cruisers, form the Aegis BMD fleet. On 30 July 2009, the US Navy successfully tested the Aegis BMD system on the USS Hopper (DDG 70).

Aegis BMD is the main sea-based component of the US ballistic missile defence system (BMDS). The deployed destroyers are currently equipped with the 3.6.1 and 4.0.1 versions of the system. Future software upgrades will include the transition of the system to the more advanced 5.0, 5.1 and 5.2 versions.

Both Tomahawk and standard missiles are fired from two Lockheed Martin mk41 vertical launch systems. The first test of the weapon control system for the new Tactical Tomahawk (block IV) took place on USS Stethem (DDG 63) in October 2002. The full-rate production deliveries of the missile began in May 2004 and it entered service with the US Navy in September 2004. The new missile has the capability for mission planning onboard the launch vessel, in-flight targeting and loitering.

In December 2004, Raytheon began deliveries of Standard MissileSM-3. Based on hit-to-kill technology, the SM-3 has a kinetic warhead and is designed for deployment against short-range to medium-range ballistic missiles. The SM-3 block 1B missile also incorporates a two-colour infrared seeker and a throttling divert and attitude control system.

The SM-3 will be upgraded to SM-3 Block IIA and SM-3 Block IIB. USS John Finn launched an SM-3 Block IIA missile to successfully intercept and destroy the target during a flight test off the coast of Hawaii in October 2018.

There are eight Boeing Harpoon surface-to-surface missiles and Lockheed Martin ASROC vertical launch anti-submarine systems, armed with the mk50 or mk46 torpedo. ASROC is launched from the mk41 VLS.

Arleigh Burke vessels are fitted with the evolved Sea Sparrow missile (ESSM) developed by Raytheon. ESSM is an advanced ship self-defence missile for use against anti-ship missiles.

In July 2002, the first ESSM sea launch was carried out by Flight IIA vessel, USS Shoup. The missile was launched from the mk41 VLS and the Aegis AN / SPY-1D radar successfully guided the missile to destroy the target. ESSM passed US Navy operational testing and evaluation (OPEVAL) in September 2003 and entered full-rate production in March 2004. USS Chaffee and McCampbell were equipped with the new missiles.

The Phalanx 1B upgrade includes a Thales Optronics HDTI5-2F thermal imager, improved Ku-band radar and longer gun barrel, providing an increased rate of fire of 4,500rpm. Flight IIA vessel USS Winston Churchill is the first ship to be fitted with the US Navy’s most advanced gun, the mk45 mod 4 that can fire extended-range guided munitions (ERGM) to a range of nearly 60 miles. The Raytheon 127mm ERGM procurement was cancelled in July 2008.

The ship’s electronic countermeasures / support measures system is the Raytheon AN / SLQ-32(V)3, which performs radar warning and jamming. The new SLQ-32(V)6 variant was introduced to enhance the electronic warfare capabilities of the destroyers.

The navy is working with Northrop Grumman under the Surface Electronic Warfare Improvement Program (SEWIP) Block 3 to deliver electronic attack capability to the SLQ-32(V) system.

Northrop Grumman aims to install the first SEWIP Block 3 system onboard a DDG 51 destroyer in 2021.

Argon was awarded a contract for the upgrade of the Nixie system (SLQ-25C) in November 2006 and further upgrade (SLQ-25D) in February 2008. The upgrades include open architecture software and a new lightweight winch.

Arleigh Burke vessels, USN cruisers and LPDs will be fitted with the BAE Systems Australia mk53 Nulka active missile decoy system. Nulka is a hovering rocket system, which guides incoming missiles away from the ship.

Nulka was developed by the Australian Defence Science and Technology Organisation in Canberra and Lockheed Martin Sippican in Massachusetts, US. In November 2008, USS Higgins (DDG 76) became the 100th USN vessel to be fitted with Nulka with 33 more planned.

The sonar suite is the Lockheed Martin SQQ-89(V)6, which includes Edo Corporation AN / SQS-53C bow-mounted active search-and-attack sonar and the AN / SQR-19B passive towed array.

The suite was upgraded to SQQ-89(V)15 on over 100 Arleigh Burke (DDG 51) destroyers to allow the deployment of the Lockheed Martin AN / WLD-1 remote mine-hunting system.

USS Momsen (DDG 92) was the first vessel to be fitted with the AN / WLD-1 RMS, which will feature on all subsequent vessels. AN / WLD-1 includes a remote mine-hunting vehicle (RMV) that tows the AN / AQS-20A variable depth sonar (VDS).

The destroyers are powered by four GE LM 2500 gas turbines, each rated at 33,600hp with a power turbine speed of 3,600rpm, driving two shafts with controllable pitch propellers. 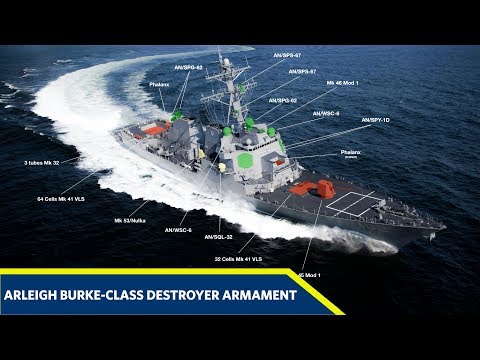 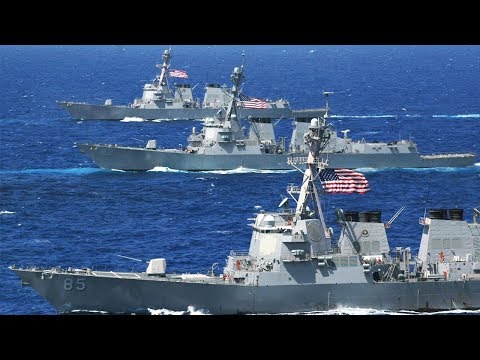 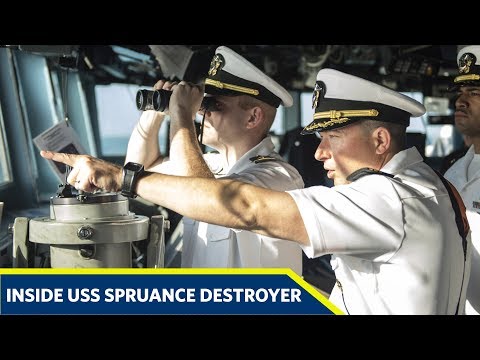