It was developed as part of the Future Rapid Effects System’s (FRES) Specialist Vehicle (SV) programme of the UK. The Scout SV programme was officially renamed as Ajax in September 2015.

The new Ajax vehicle is developed to replace the CVR Scimitar light tank currently in service with the British Forces. This variant can carry a crew of three. Its critical design review (CDR) was completed in February 2015 and first pre-production prototype was unveiled in 2015.

Ajax is one of the first four planned variants to be deployed by the UK Army. The others are the recovery and repair variants and the protected mobility reconnaissance support (PMRS) infantry carrier variant that can carry up to eight soldiers and a crew of two. The base platform CDR for the PMRS variant was completed in April 2014 and the first PMRS pre-production prototype was unveiled at the DVD (Defence Vehicle Dynamics) 2014 show.

The UK Ministry of Defence (MoD) placed a £3.5bn ($5.56bn) order for 589 Ajax vehicles in six variants in September 2014. Initial live firing tests on PMRS variant were completed in December 2016.

GD delivered two Ajax platforms to the British Army for government acceptance testing in September 2017. Testing of seven prototypes is expected to be completed by 2018. The deliveries to the UK will continue through 2024.

“The Ajax vehicle is developed to replace the CVR Scimitar light tanks currently in service with the British Forces.”

Ajax is a modified military off-the-shelf (MMOTS) vehicle. Assessment of potential reconnaissance vehicles from BAE Systems and General Dynamics UK for the specialist vehicle (SV) programme was started in November 2008.

General Dynamics UK’s Scout was selected as the preferred bidder, against the BAE Systems’ CV90, in March 2010. In July 2010, the UK MoD awarded a £500m ($780m) contract to develop seven prototypes of the ASCOD SV – three Scout, repair and recovery versions and an infantry carrier variant – for the demonstration phase.

In June 2013, General Dynamics completed cold-weather trials on the mobile test rig (MTR), which is a precursor to the prototype SV. The MTR was unveiled at the DSEI (Defence and Security Equipment International) 2013 exhibition.

A common base platform (CBP) for SV will be used across the SV fleet of variations, including the Ajax reconnaissance vehicle.

The vehicle’s electronic architecture design allows for replacement of various mission subsystems while the commonality of its platform will allow for a wide number of variants, including a direct fire vehicle that would feature of a 120mm direct fire weapon delivering the capability of a light tank.

The vehicle has maximum synergy and commonality with the FRES utility vehicle (UV) and SV programmes in electronic architecture, survivability and mobility, which reduces the development costs, risks and time.

Design of the Ajax specialist vehicle

The design of Ajax SV is based on the Austrian Spanish Cooperation Development (ASCOD) SV. All variants have an open electronic architecture design.

It is expected to offer a much reliable and modern platform for improved protection, situational awareness, firepower and mobility for manned reconnaissance missions.

The ultra-quiet auxiliary power unit of the vehicle will offer quiet and concealed loitering. The rugged body will enable 24×7 surveillance operations. The vehicle can identify and detect helicopters, UAVs and decoy systems.

It has a 1.7m diameter turret ring for providing the crew with a favourable working environment. It will have a normal combat weight of 34t, which can be increased to 42t to accommodate new technology and component upgrades. The vehicle is expected to have a life of 30 years.

Companies and contractors involved with the Ajax  programme

The development of Ajax SV involves approximately 24 UK and other European based suppliers. Lockheed Martin UK was contracted to provide the turret for the vehicle. Thales UK will provide a full optronics suite based on its Orion technology. The suite will include sights for commander and gunners, reconnaissance and targeting and short-range sensors for situational awareness.

Raytheon UK was chosen for providing its Chassis Power Switch Node for the vehicle, in January 2012. The display systems will be supplied by Barco. ViaSat will design and develop the onboard encrypted data storage systems.

Lockheed Martin UK was awarded a $1bn contract by General Dynamics UK to deliver 245 turrets for the Ajax vehicle in October 2014. The first turreted AJAX prototype was unveiled in September 2015.

The Ajax vehicle is designed to provide most advanced ground-based intelligence, surveillance, target acquisition and reconnaissance (ISTAR) capabilities. It will reduce the work load on crew with its doubled target stand-off range, fast and accurate automated search, detection and tracking.

The detection and identification ranges of the vehicle will be twice to that of the currently operational battle group thermal imager (BGTI) system. An array of sensors and systems are integrated with the crew stations using General Vehicle Architecture (GVA complaint 20Gbs/s Gigabit Ethernet intelligent open architecture. It allows capturing, storing, manipulating, analysing of 6TB of data for the crew. The captured still and moving images can also be shared in real time.

The electronic architecture and integration of Bowman Tactical Communications and other C4 systems on-board enable transmission of the data to secure C4I systems of other allied forces such as the US Army.

Weapons and protection of the Ajax SV

It will have all-round modular protection, far-target thermal sights, sensors for local situational awareness and acoustic detection. It also offers a 360° remote weapon system for urban and mountainous combat.

The vehicle has seven pairs of tracked road wheels on either side. Its wide track and high power-to-weight ratio will enable it to improve dramatically on the all-terrain manoeuvrability of the CVR 2 to effectively perform ground-based ISTAR operations.

A 600kW MTU 8V 199 TE21 engine and Renk 256B automatic transmission system, dual rate suspension system, seven wheel-station running gear give the vehicle a top speed of 70km/h. The transmission is rated at 45t allowing the vehicle to meet different variant configurations without any major upgrades. 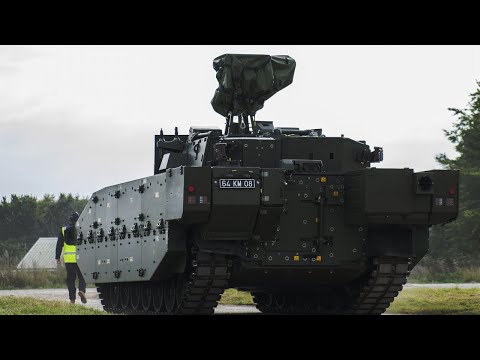 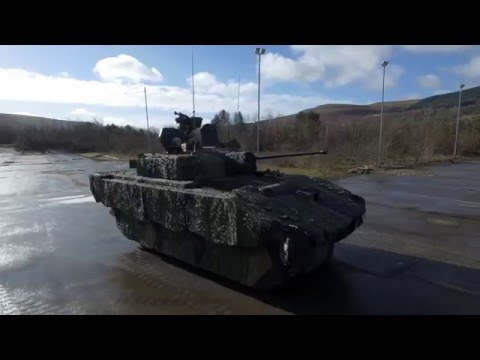 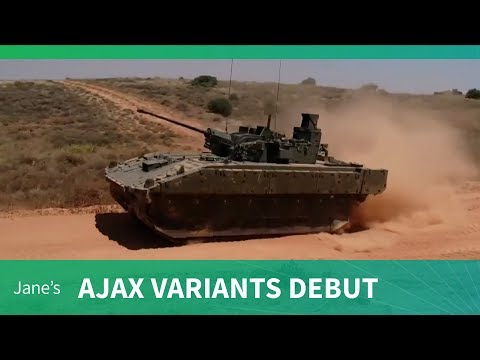