The ASCOD (Austrian Spanish Cooperation Development) armoured fighting vehicle family is the product of a cooperation agreement between Austrian Steyr-Daimler-Puch AG (in 1998 the production of heavy armed vehicles was sold out under the name Steyr-Daimler-Puch Spezialfahrzeug, which is now the producer) and Spanish General Dynamics Santa Bárbara Sistemas (both companies are now divisions of a unit of General Dynamics). The ASCOD family includes the LT 105, a light tank equipped with a 105 mm gun, a SAM launcher, an anti-tank missile launcher, mortar carrier, R&R vehicle, Command & Control vehicle, ambulance, artillery observer, and the AIFV model. In Spanish service, the vehicle is called “Pizarro”, while the Austrian version is called “Ulan”.

The main version of the ASCOD is the tracked infantry fighting vehicle. It follows a conventional layout with a front-mounted engine and a rear compartment for the dismounts. The driver’s seat is located at the left hull front, whereas the commander and gunner sit in the slightly off-center-mounted two-man turret. The rear compartment also has two hatches on the roof. The Ulan can carry eight dismounts, whereas the Pizarro only carries seven.

The ASCOD mounts a 30 mm Mauser MK-30/2 autocannon in a fully traversable electro-mechanical turret. The dual belt-fed 30 mm cannon, electrical stabilized on two planes, is able to fire at a rate of up to 770 rounds per minute and accurately engage targets on the move. As secondary armament, the ASCOD carries a 7.62 mm machine gun; the Spanish Pizarro is fitted with an MG3 machine gun, whereas the Ulan is fitted with an FN MAG. The Ulan carries 200 rounds of 30 mm and 600 rounds of 7.62 mm rounds in the turret, a further 205 rounds for the 30 mm gun and up to 1,290 for the 7.62 mm machine gun are stored inside the hull. The Pizarro only carries 300 rounds of main gun ammunition. This armament is comparable to that of the M2 Bradley and the CV90, and performed well in a Norwegian vehicles trial, although it ultimately lost to the Swedish CV90.

The ASCOD is constructed of several rolled steel armour plates. The armour provides protection against 14.5 mm armour-piercing ammunition fired from distances of 500 meters or more along the frontal 60° arc, with all around protection against 7.62 mm ammunition. Furthermore, the turret is fitted with two banks of 76 mm Wegmann multi-purpose grenade launchers, which can fire smoke grenades for self-protection as well as high-explosive grenades with fragmentation warhead to a maximum range of 50 metres (160 ft).

The Pizarro is additionally fitted with limited amounts of SABBLIR explosive reactive armour along the frontal arc and might be upgraded with more later. The SABBLIR reactive armour increases protection against shaped charge warheads as used on rocket propelled grenades. The Ulan has been fitted with MEXAS composite armour, which increases ballistic protection against up to 30 mm APFSDS rounds fired from a 1,000 m range over the forward 30° arc, and all round protection against 14.5 mm armour piercing incendiary (API) rounds from a range of 500 m.[2] The Ulan is also fitted with spall-liners in order to decrease casualties in case of armour penetration.

In terms of mobility, the Spanish Pizarro is fitted with a 600 horsepower (450 kW) MTU SV-183 TE22 engine, while the Austrian Ulan includes a 720 horsepower (540 kW) MTU 8V-199-TE20 engine. The smaller Spanish engine gives it a power-to-weight ratio of 21, and the larger engine one of 25, offering both vehicles excellent mobility. Both versions use a Renk HSWL 106C hydro-mechanical transmission, and suspension based on torsion bar and rotary dampers; designed and manufactured by “Piedrafita”. The ASCOD uses Diehl type 129 tracks. The Pizarro can go a maximum speed of 70 km/h, and a maximum reverse speed of 35 km/h. The ASCOD has a ground-clearance of 450 millimetres (18 in). The Ulan can accelerate from 0 to 50 kilometres per hour (31 mph) in 14 seconds. It can cross 2.3 metres (7 ft 7 in) ditches, climb 950 millimetres (37 in) walls and ford through 1.2 metres (3 ft 11 in) deep rivers. It is able to drive at 75% gradient and 40% side slope.

The ASCOD chassis has been used for a number of vehicles in Spanish service and numerous private ventures developed for the export market. Aside from the IFV version, the ASCOD has been offered as light tank and scout vehicle. The ASCOD Direct Fire light tank can mount a number of different commercial turrets with 105 or 120 mm tank guns. It is expected to weigh about 30 tonnes.

Steyr-Daimler-Puch Spezialfahrzeuge has developed an improved version called Ulan 2; this, however, was never ordered by the Austrian government.

An improved version of the ASCOD, called ASCOD 2, has been developed by General Dynamics and was presented in 2004. The ASCOD 2 uses the more powerful MTU 8V 199T21 engine, which provides an output of 600 kilowatts (800 hp), together with a Renk HSWL 256 B transmission and Diehl 1028 tracks. It has an increased gross vehicle weight of 38 tons, with a growth potential to 42 tons. The ASCOD 2 has been presented as an IFV (with the SP-30 turret of the original ASCOD), as APC with raised roof and armed with an M2 machine gun (in a BAE Lemur remote weapon station) and as specialized APC for urban combat (designated ASCOD PSO).

In June 2008, GDELS, in conjunction with KMW, announced Donar, a medium-weight 155 mm self-propelled artillery system based on the KMW Artillery Gun Module (AGM) autonomous artillery system integrated with the ASCOD 2 chassis. A prototype has begun mobility and firing trials in Germany.

In March 2010, the UK MoD announced that ASCOD 2 will be used as the base for the Scout Specialist Vehicle of the FRES program, which later was renamed to “Ajax”.

During Eurosatory 2018, General Dynamics European Land Systems presented a new variant of the ASCOD 2. The ASCOD medium main battle tank (MMBT), with a gross vehicle weight of 42 tonnes, is fitted with the Italian Leonardo Defence Systems HITFACT 120mm turret. This is also armed with a 7.62mm coaxial machine gun, a 7.62mm pintle-mounted gun and a 12.7mm remote weapon station on the roof. The 120mm smoothbore gun is coupled to a computerised fire control system, with the commander and gunner having stabilised day/thermal sights incorporating a laser rangefinder.

The ASCOD vehicle was chosen by the UK MoD as the common base platform on which the Ajax would be developed. This selection was the result of the UK’s Specialist Vehicle Programme. Around 300 British engineers at General Dynamics UK’s Oakdale facility began developing the Scout from the ASCOD after being awarded the contract in 2010.[9][10]

The Ajax is planned to include the following upgrades:

Griffin II is a light tank proposed for US Army in Mobile Protected Fire power program.

Griffin III is a IFV variant proposed for US Army in Optionally-Manned Fighting Vehicle program as M2/M3 Bradley replacement.

ASCOD Pizarro is built by Santa Bárbara Sistemas. It has multiple variants:

ASCOD Ulan is built by Steyr-Daimler-Puch Spezialfahrzeuge. It includes a more powerful 530 kW engine, and a different fire control system built by Kollsman. 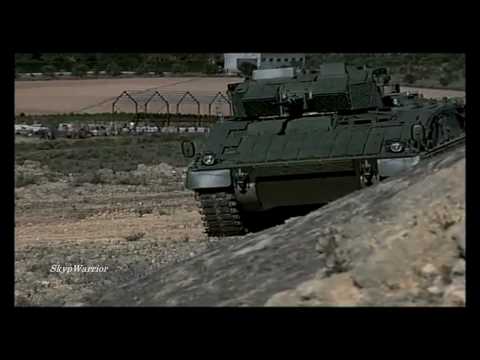 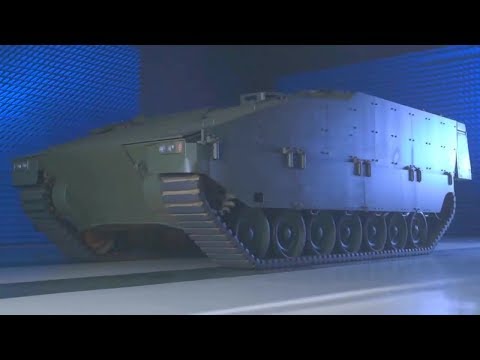