Stryker is based on the GDLS Canada LAV III 8×8 light armoured vehicle, in service since early 2001. The LAV III is itself a version of the Piranha III built by Mowag of Switzerland, now part of GDLS – Europe.

The eight-wheeled Stryker armoured combat vehicle is the first new military vehicle to enter service into the US Army since the Abrams tank in the 1980s.

Fabrication and final assembly of the vehicles were shared among plants at Anniston, Alabama, Lima, Ohio and London, Ontario.

The contract for the US Army’s interim armoured vehicle (IAV) was awarded in November 2000. The vehicles form the basis of six brigade combat teams. The contract requirement covers the supply of 2,131 vehicles.

Deliveries of Stryker infantry carriers began in April 2002. A seventh SBCT has subsequently been planned and the requirement raised to 2,691.

Initial operational tests and evaluation began in May 2003 with the Arrowhead Lightning II exercise. Since 2003, the vehicles have undergone more than six million miles in service through two Operational Iraqi Freedom rotations, demonstrating a combined fleet operational readiness rate of 96%.

In November 2003, the Stryker armoured combat vehicle entered operational service with the US Army, with the first Stryker SBCT, 3rd Brigade, 2nd Infantry Division, following its deployment to Iraq. The second SBCT, 1st Brigade, 25th Infantry Division, was deployed to Iraq in September 2004. The third SBCT, the 172nd, deployed in July 2005.

The first US Air Force Stryker unit made its first deployment in Iraq in August 2005.
In December 2008, the Iraqi Government requested the foreign military sale (FMS) of 400 Stryker infantry carrier vehicles.

In March 2009, a contract worth $4.8m to produce 805 Stryker driver enhancement kits was awarded to JWF Defense Systems by General Dynamics Land Systems – Canada. The deliveries were completed between April and June 2009.

During March 2009, the Stryker medical evacuation vehicle (MEV), the new ambulance variant, was deployed by the US Army. According to an army transformation strategy, 30 MEVs were delivered to the 3rd Infantry Division’s 3rd Heavy Brigade Combat Team to be deployed in the Middle East. The vehicle was on display at the Garfield Circle, Washington DC, on March 23-24, 2009.

In July 2009, the US Army TACOM awarded a contract worth $55.2m to General Dynamics Land Systems to reset 330 Stryker infantry combat vehicles.

Under this contract, the Stryker vehicles returning from Operation Iraqi Freedom will be serviced, repaired and modified, returning them to a like-new condition before further deployment.

The reconnaissance vehicle is fitted with the Raytheon long-range advanced scout surveillance system (LRAS3). The system includes a second-generation horizontal technology initiative (HTI) thermal imager, day TV and eyesafe laser rangefinder. The US Army is to enhance the system by lengthening the sensor mast to 10m, increasing the range to 10km.

The mortar carrier (MCV-B) entered service in August 2005. The MCV-B’s 120mm mortar is mounted inside the vehicle and fires through doors that swing open at the top of the vehicle. As well as the mounted mortar, the vehicle carries a second mortar which has to be unloaded before firing. The vehicle has a digital fire control system and a crew of five.

The first of 17 LRIP nuclear, biological, chemical reconnaissance vehicle (NBC RV) variants was delivered in December 2005. The system can collect and automatically integrate contamination information with vehicle navigation and meteorological sensor data and then transmit digital warning messages to other forces.

The US Army placed a contract for 33 medical evacuation vehicles (MEV) in September 2007. The MEV can accommodate up to six patients and a medical team.

The Stryker is a full-time four-wheel drive, selectively eight-wheel drive, armoured vehicle weighing approximately 19t. The vehicle can attain speeds of 62mph on metalled roads and has a maximum range of 312 miles.

The basic infantry carrier vehicle (ICV) provides armoured protection for the two-man crew and a squad of nine infantry soldiers. The basic hard steel armour is augmented by applique panels of lightweight ceramic/composite armour produced by a team led by IBD / Deisenroth Engineering of Germany.

The armour provides integral all-round 14.5mm protection against machine gun rounds, mortar and artillery fragments. In Iraq, in January 2004, Stryker vehicles were outfitted with a ‘cage’ of slat armour, which encircles the vehicle about 18in from the main body, as protection against rocket-propelled grenades (RPGs).

In March 2005, United Defense (now BAE Systems Land and Armaments) was awarded a contract to provide 289 full-vehicle add-on reactive armour kits for the Stryker.
The US Army awarded a $30m contract in July 2010 to General Dynamics Land Systems (GDLS) for the production of a dual V-shaped hull for the Stryker infantry combat vehicle to be completed by February 2012.

The ICV has a protector remote weapon station, from Kongsberg Protech of Norway, with a universal soft mount cradle, which can mount either a 0.50-calibre M2 machine gun, MK19 40mm grenade launcher or MK240 7.62mm machine gun. It is also armed with four M6 smoke grenade launchers.

The vehicle’s commander has an FBCB2 (force XXI battle command brigade and below) digital communications system that allows communication between vehicles through text messaging and a map network, as well as with the battalion.

The map shows the position of all vehicles on the battlefield and the commander can mark the position of enemy forces on the map which can then be seen by other commanders. FBCB2, ‘the tactical internet’, includes the Raytheon AN/TSQ-158 enhanced position location reporting system (EPLRS).

In February 2009, BAE Systems was awarded a production contract for the Check-6 thermal imaging driver’s rear-view camera (DRVC) system for the Stryker ICV. The system is fitted to the vehicle’s taillight housing. Deliveries began in April 2009.

The MGS entered service with the US Army in May 2007, with the first operational deployment to Iraq with the 4th brigade, 2nd Division.

By November 2007, three Stryker brigades had received the MGS. A production contract for 62 vehicles was placed in August 2008.

Stryker MGS was selected by the Canadian Army, which planned to acquire 66 systems to replace Leopard 1 tanks. However, it was decided to acquire surplus Leopard 2 tanks instead.

The turret is armed with a M68A1E4 105mm cannon with muzzle brake and an M2 0.50-calibre commander’s machine gun.

The mobile gun system has the same C4ISR communications and driver’s vision equipment as the ICV, but the gunner has three periscopes and a compact modular sight with dual field of view day and thermal channels.

The MGS also has detectors for nuclear, biological and chemical weapons.

An advantage to the brigade combat teams in having the mobile gun vehicle of the same Stryker family of vehicles is the commonality across the entire capability and the reduced logistics requirement.

The Stryker mobile gun does not require a track-vehicle mechanic as would be required for example for the deployment of an M-8 mobile armoured gun system.

Stryker can be transported on the ground using trucks or by air on C-17, C-5 and C-130 aircraft. The C-5 and C-17 aircraft can carry seven and four Strykers respectively.

The C-130H can fly safely carrying a maximum 38,000lb load for up to 1,000nm. The Stryker’s weight, 36,240lb and size are within the payload limit of the C-130H. The C-130 can operate from smaller airfields in more remote locations. All configurations of the Stryker can disembark from the C-130 in combat-ready status. 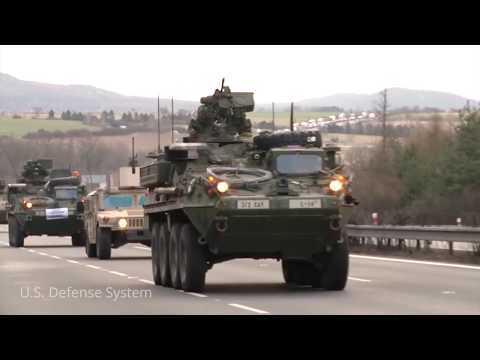 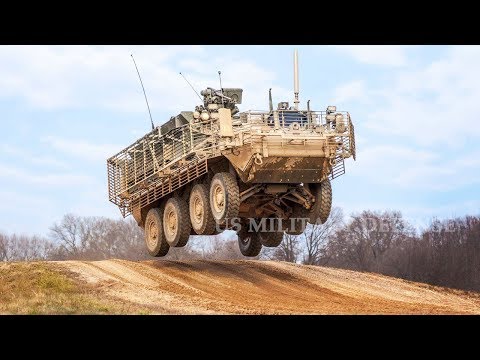 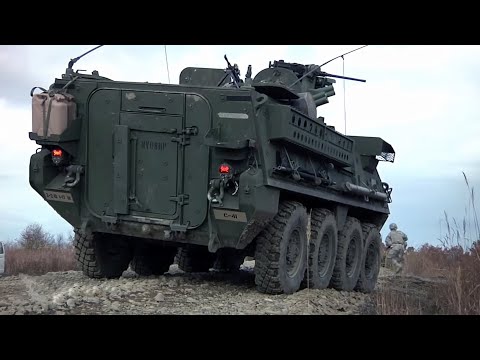