The AW129 multirole combat helicopter is the latest variant of the A129 Mangusta (Mongoose) helicopter in service with the Italian Army. It is manufactured by AgustaWestland, a joint venture company, which was originally formed by Finmeccanica of Italy and GKN of the UK, but is now solely owned by Finmeccanica.

The A129 International was renamed AW129 in 2007. The AW129 is a multirole helicopter for armed reconnaissance and surveillance, high-value ground-target engagement, escort, fire support and air-threat suppression. It is armed with powerful air-to-ground and air-to-air missiles, an off-axis cannon and an increased weapon payload. The five-bladed A129 International also has more powerful engines than the four-bladed Mangusta.

The AW129 is able to self-deploy over 1,000km, using external fuel tanks while carrying four air-to-air missiles for self-protection. The helicopter is air transportable by C-130 and larger transport aircraft.

The Italian Army is equipped with 60 A129 Mangusta helicopters and 15 AW129, referred to as A129 CBT (combat configuration).

In January 2002, AgustaWestland was awarded a contract to upgrade the first 45 to the multirole standard.

“The five-bladed A129 International has more powerful engines than the four-bladed Mangusta.”

The Mangusta were successfully deployed with UN operations in Somalia, Angola and Kosovo. Italian Army A129 helicopters have been deployed in Iraq as part of Operation Iraqi Freedom and were deployed to Afghanistan in summer 2007, as part of the Nato International Security Force.

In September 2007, Turkey placed an order for 51 (plus 41 options) A129 helicopters for the attack and tactical reconnaissance (ATAK) programme. Tusas Aerospace Industries (TAI) is the prime contractor and is responsible for final assembly of the helicopter, which will be designated T129. AgustaWestland and Aselsan are the main subcontractors.

The maiden flight of the T129 helicopter took place on 28 September 2009 during an official ceremony held at AgustaWestland’s facility in Vergiate, Italy. Deliveries are expected to begin in 2012.

In November 2010, Turkey placed a $205m order with AgustaWestland for nine T129 combat helicopters and spare parts. Deliveries are scheduled to be completed by mid-2012.

The structure of the helicopter is a semi-monocoque design with an aluminium alloy frame. Composite materials make up almost 50% of the fuselage weight.

The pilot and gunner cockpits are in a stepped tandem configuration. Both cockpits are equipped with multifunction displays, which present information from the integrated management system and provide a synthetic waypoint map, navigation data, weapon status, weapon selection, communications and aircraft / flight data. The displays are equipped with multifunction keyboards.

The helicopter is equipped with an automatic flight control system, which provides nap-of-the-earth flight capability and the level of stability for precise weapon aiming.

Weapons on the AW129

The helicopter has dual air-to-ground missile capability with the Lockheed Martin Hellfire or Raytheon TOW 2 missile or a mix of both, giving the gunner selective fire against low and high-value targets, and the capability of precise hits in urban environments. The Mangusta is fitted with the HeliTOW system for the TOW2A missile.

The AW129 also has dual rocket system capability, deploying 70mm rockets for ammunition commonality with Nato countries and 81mm rockets for longer-range engagements. The Mangusta can carry four 81mm rocket launchers. A 20mm three-barrel Gatling-type turreted cannon with 500 rounds of ammunition is mounted under the nose.

The helicopter’s infrared night-vision system (HIRNS) includes a mini forward-looking infrared (FLIR), supplied by Honeywell, mounted on a steerable platform at the nose of the helicopter.

The pilot’s integrated helmet and display sighting system (IHADS), by Honeywell, positions a monocle over one eye and displays the view presented by the FLIR. The system provides automatic weapon aiming, which can be used by day or night.

A mast-mounted sight can be installed, giving the helicopter the capability to aim and fire weapons from cover. The sight is used for target acquisition, missile tracking, laser target designation, laser tracking and laser rangefinding.

The AW129 helicopter has a fireproof engine compartment with two low-noise LHTEC-T800 turboshaft engines. The engines are separated, and there are two separate fuel systems with cross-feed capability.

The crash-resistant tanks are self-sealing and fitted with self-sealing lines and a digital fuel feed controller. The thermal signature is minimised by the installation of an infrared exhaust suppression system. 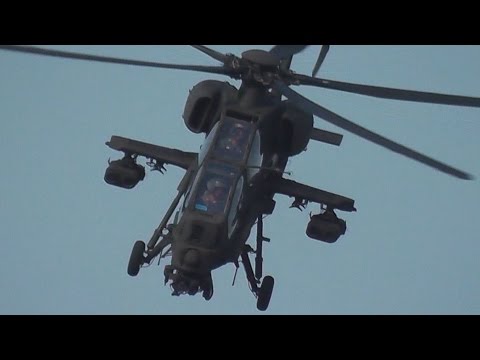 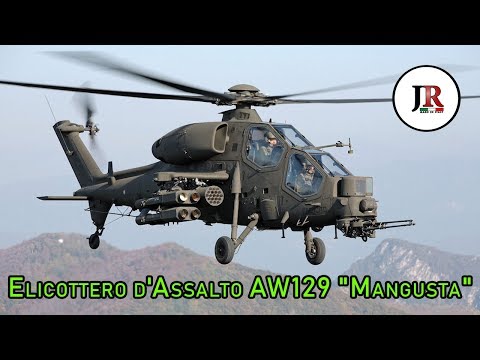 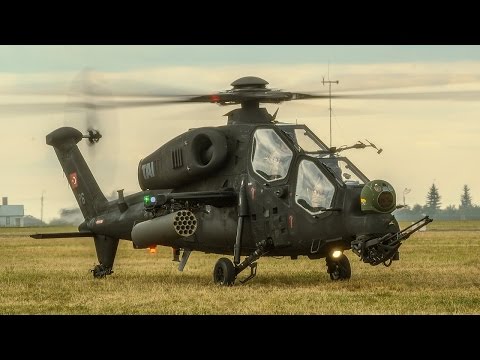