The Rockwell B-1 Lancer is a supersonic variable-sweep wing, heavy bomber used by the United States Air Force. It is commonly called the “Bone” (from “B-One”). It is one of three strategic bombers in the U.S. Air Force fleet as of 2020, the other two being the B-2 Spirit and the B-52 Stratofortress.

The B-1 was first envisioned in the 1960s as a platform that would combine the Mach 2 speed of the B-58 Hustler with the range and payload of the B-52, and was meant to ultimately replace both bombers. After a long series of studies, Rockwell International (now part of Boeing) won the design contest for what emerged as the B-1A. This version had a top speed of Mach 2.2 at high altitude and the capability of flying for long distances at Mach 0.85 at very low altitudes. The combination of the high cost of the aircraft, the introduction of the AGM-86 cruise missile that flew the same basic profile, and early work on the stealth bomber all significantly affected the need for the B-1. This led to the program being canceled in 1977, after the B-1A prototypes had been built.

The program was restarted in 1981, largely as an interim measure due to delays in the B-2 stealth bomber program, with the B-2 eventually reaching initial operational capability in 1997. This led to a redesign as the B-1B, which differed from the B-1A by having a lower top speed at high altitude of Mach 1.25, but improved low-altitude performance of Mach 0.96. The electronics were also extensively improved during the redesign, and the airframe was improved to allow takeoff with the maximum possible fuel and weapons load. The B-1B began deliveries in 1986 and formally entered service with Strategic Air Command (SAC) as a nuclear bomber in that same year. By 1988, all 100 aircraft had been delivered.

In the early 1990s, following the Gulf War and concurrent with the disestablishment of SAC and its reassignment to the newly formed Air Combat Command, the B-1B was converted to conventional bombing use. It first served in combat during Operation Desert Fox in 1998 and again during the NATO action in Kosovo the following year. The B-1B has supported U.S. and NATO military forces in Afghanistan and Iraq. The Air Force had 62 B-1Bs in service as of 2016. The B-1B is expected to continue to serve into the 2030s, with the Northrop Grumman B-21 Raider to begin replacing the B-1B after 2025. The B-1s in inventory are planned to be retired by 2036.

The B-1 has a blended wing body configuration, with variable-sweep wing, four turbofan engines, triangular fin control surfaces and cruciform tail. The wings can sweep from 15 degrees to 67.5 degrees (full forward to full sweep). Forward-swept wing settings are used for takeoff, landings and high-altitude maximum cruise. Aft-swept wing settings are used in high subsonic and supersonic flight. The B-1’s variable-sweep wings and thrust-to-weight ratio provide it with improved takeoff performance, allowing it to use shorter runways than previous bombers. The length of the aircraft presented a flexing problem due to air turbulence at low altitude. To alleviate this, Rockwell included small triangular fin control surfaces or vanes near the nose on the B-1. The B-1’s Structural Mode Control System rotates the vanes automatically to counteract turbulence and smooth out the ride.

Unlike the B-1A, the B-1B cannot reach Mach 2+ speeds; its maximum speed is Mach 1.25 (about 950 mph or 1,530 km/h at altitude), but its low-level speed increased to Mach 0.92 (700 mph, 1,130 km/h). The speed of the current version of the aircraft is limited by the need to avoid damage to its structure and air intakes. To help lower its radar cross section (RCS), the B-1B uses serpentine air intake ducts (see S-duct) and fixed intake ramps, which limit its speed compared to the B-1A. Vanes in the intake ducts serve to deflect and shield radar emissions from the highly reflective engine compressor blades.

The B-1A’s engine was modified slightly to produce the GE F101-102 for the B-1B, with an emphasis on durability, and increased efficiency. The core of this engine has since been re-used in several other engine designs, including the GE F110 which has seen use in the F-14 Tomcat, F-15K/SG variants and most recent versions of the General Dynamics F-16 Fighting Falcon. It is also the basis for the non-afterburning GE F118 used in the B-2 Spirit and the U-2S. The F101 engine was the basis for the core of the extremely popular CFM56 civil engine, which can be found on some versions of practically every small-to-medium-sized airliner. The nose gear cover door has controls for the auxiliary power units (APUs), which allow for quick starts of the APUs upon order to scramble.

The B-1’s defensive electronics include the Eaton AN/ALQ-161A radar warning and defensive jamming equipment, which has three sets of antennas; one at the front base of each wing and the third rear-facing in the tail radome. Also in the tail radome is the AN/ALQ-153 missile approach warning system (pulse-Doppler radar). The ALQ-161 is linked to a total of eight AN/ALE-49 flare dispensers located on top behind the canopy, which are handled by the AN/ASQ-184 avionics management system. Each AN/ALE-49 dispenser has a capacity of 12 MJU-23A/B flares. The MJU-23A/B flare is one of the world’s largest infrared countermeasure flares at a weight of over 3.3 pounds (1.5 kg). The B-1 has also been equipped to carry the ALE-50 towed decoy system.

Also aiding the B-1’s survivability is its relatively low radar cross-section (RCS). Although not technically a stealth aircraft in a comprehensive sense, thanks to the aircraft’s structure, serpentine intake paths and use of radar-absorbent material its RCS is about 1/50th of the similar sized B-52’s RCS; this is about 26 ft2 or 2.4 m2, roughly equivalent to the RCS of a small fighter aircraft.

The B-1 has been upgraded since production, beginning with the “Conventional Mission Upgrade Program” (CMUP), which added a new MIL-STD-1760 smart-weapons interface to enable the use of precision-guided conventional weapons. CMUP began with Block A, which was the standard B-1B with the capability to deliver non-precision gravity bombs. Block B brought an improved Synthetic Aperture Radar, and upgrades to the Defensive Countermeasures System and was fielded in 1995. Block C provided an “enhanced capability” for delivery of up to 30 cluster bomb units (CBUs) per sortie with modifications made to 50 bomb racks.

In 2007, the Sniper XR targeting pod was integrated on the B-1 fleet. The pod is mounted on an external hardpoint at the aircraft’s chin near the forward bomb bay. Following accelerated testing, the Sniper pod was fielded in summer 2008. Future precision munitions include the Small Diameter Bomb. In 2011, the Air Force was considering upgrading B-1s with multiple ejector racks so that they can carry three times as many smaller JDAMs than previously.

In February 2014, work began on a multi-year upgrade of 62 B-1Bs, scheduled to be completed by 2019. The vertical situation display upgrade (VSDU) replaces existing flight instruments with multifunction color displays, a second display aids with threat evasion and targeting, and act as a back-up display. Additional memory capacity is to be installed for the diagnostics database. Procurement and installation of the IBS upgrades is expected to cost $918 million, research and engineering costs are estimated at $391 million. Other additions are to replace the two spinning mass gyroscopic inertial navigation system with ring laser gyroscopic systems and a GPS antenna, replacement of the APQ-164 radar with the Scalable Agile Beam Radar – Global Strike (SABR-GS) active electronically scanned array, and a new attitude indicator.

In August 2019, the Air Force unveiled a modification to the B-1B to allow it to carry more weapons internally and externally. Using the moveable forward bulkhead that can be moved forward or back for different mission configurations, space in the intermediate bay was increased from 180 to 269 in (457 to 683 cm). Expanding the internal bay to make use of the Common Strategic Rotary Launcher (CSRL), as well as utilizing six of the eight external hardpoints that had been previously out of use to keep in line with the New START Treaty, would increase the B-1B’s weapon load from 24 to 40. The configuration also enables it to carry heavier weapons in the 5,000 lb (2,300 kg) range, such as hypersonic missiles; the AGM-183 ARRW is planned for integration onto the bomber, which could carry up to 31 missiles.

The B-1A was the original B-1 design with variable engine intakes and Mach 2.2 top speed. Four prototypes were built; no production units were manufactured.

The B-1B is a revised B-1 design with reduced radar signature and a top speed of Mach 1.25. It is optimized for low-level penetration. A total of 100 B-1Bs were produced.

The B-1R was a proposed upgrade of existing B-1B aircraft. The B-1R (R for “regional”) would be fitted with advanced radars, air-to-air missiles, and new Pratt & Whitney F119 engines. This variant would have a top speed of Mach 2.2, but with 20% shorter range. Existing external hardpoints would be modified to allow multiple conventional weapons to be carried, increasing overall loadout. For air-to-air defense, an active electronically scanned array (AESA) radar would be added and some existing hardpoints modified to carry air-to-air missiles. If needed the B-1R could escape from air-to-air encounters with its Mach 2+ speed, as few aircraft are capable of sustained speeds over Mach 2. 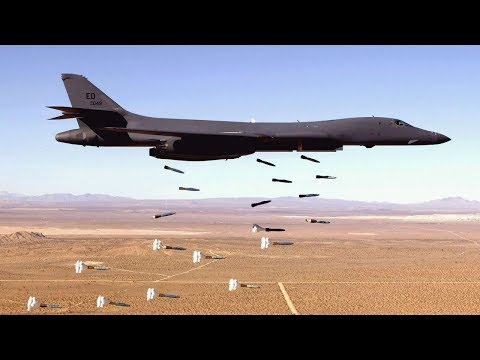 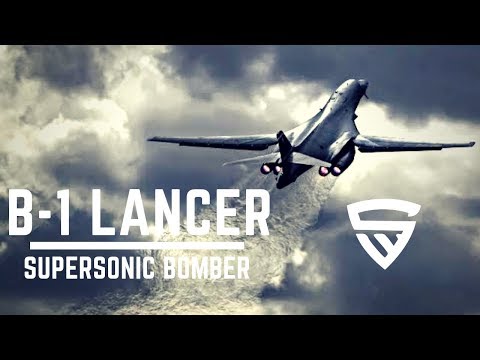 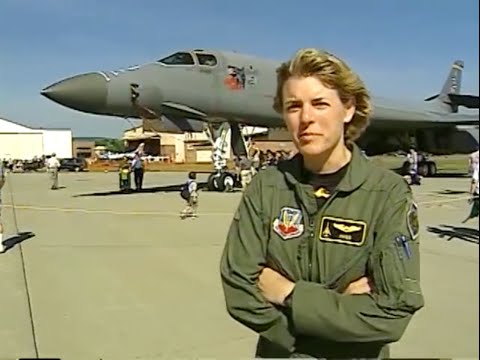