The Lockheed C-5 Galaxy is a large military transport aircraft originally designed and built by Lockheed, and now maintained and upgraded by its successor, Lockheed Martin. It provides the United States Air Force (USAF) with a heavy intercontinental-range strategic airlift capability, one that can carry outsized and oversized loads, including all air-certifiable cargo. The Galaxy has many similarities to the smaller Lockheed C-141 Starlifter and the later Boeing C-17 Globemaster III. The C-5 is among the largest military aircraft in the world.

The C-5 Galaxy’s development was complicated, including significant cost overruns, and Lockheed suffered significant financial difficulties. Shortly after entering service, cracks in the wings of many aircraft were discovered and the C-5 fleet was restricted in capability until corrective work was completed. The C-5M Super Galaxy is an upgraded version with new engines and modernized avionics designed to extend its service life beyond 2040.

The USAF has operated the C-5 since 1969. In that time, the airlifter supported US military operations in all major conflicts including Vietnam, Iraq, Yugoslavia, and Afghanistan, as well as allied support, such as Israel during the Yom Kippur War and operations in the Gulf War. The Galaxy has also been used to distribute humanitarian aid and disaster relief, and supported the US space program.

The Lockheed Martin C-5B Galaxy strategic transport aircraft first entered service with the US Air Force in 1986. The USAF has 126 C-5A/B aircraft in service, but is retiring a number of the C-5As.

The C-5B is capable of carrying a maximum payload up to 118,387kg to a range of 5,526km,which can be extended by in-flight refuelling. The heavy logistic transport aircraft is of cantilever high-wing monoplane design with a fail-safe semi-monocoque aluminium alloy fuselage.

The US Air Force initiated a comprehensive upgrade programme to ensure the capability of the C-5 fleet to at least 2040. The first phase of the upgrade is the avionics modernisation programme (AMP). The second phase, the C-5 reliability enhancement and re-engining programme (RERP) is to upgrade the aircraft’s engines and pylons, as well as to improve reliability.

In December 2001, Lockheed Martin Aeronautics Company was awarded a system development and demonstration (SDD) contract for the C-5 RERP, to apply the new systems to four C-5 aircraft by 2009.

First flight of the C-5M, the designation given to aircraft upgraded under RERP and AMP, took place in June 2006. The second of three C-5M test aircraft made its first flight in November 2006 and the third (a modernised C-5A) in March 2007. The first of three test aircraft was delivered to the USAF for operational test and evaluation in December 2008 and the remainder were delivered in February 2009.

“The Lockheed Martin C-5B Galaxy is a strategic transport aircraft in service with
the USAF.”

In February 2008, the USAF approved the upgrade under the C-5 RERP for 49 additional aircraft – 47 C-5Bs used for intra-theatre lift and two C-5Cs used for support of the US space programme.

In February 2009, the USAF awarded two contracts worth $324m for the C-5M Super Galaxy programme. The first contract is $299m worth of RERP production for nine aircraft, while the second contract is $25m worth of interim contractor support (ICS) for familiarisation and operational test and evaluation of the Super Galaxy.

In September 2009, the test aircraft flown by a joint USAF and Lockheed Martin flight crew claimed 41 world aeronautical records in a single flight.

The CF6-80-C2 engine produces more than 50,000lb of thrust, a 22% increase over the TF39 engines and is Stage III noise compliant. It is also fitted to commercial airliners such as the Boeing 767 and Airbus A310. The new engine with a FADEC III control system received US Federal Aviation Administration certification in September 2004.

Lockheed placed its first C-5 Galaxy aircraft into RERP production line in August 2009, the second in January 2010 and the third in June 2010.

After the completion of the changes, Lockheed Martin and the Air Force carry out operational check flights of the C-5M. The redelivery of the first production of C-5M was in 2010 to Dover Air Force Base.

The first flight of the upgraded aircraft took place in December 2002. A production contract for the first eight kits was issued in April 2003 and for the next 18 in January 2004. The first was delivered in October 2004, and installation had been completed on 42 of the 112 USAF C-5A/B aircraft by September 2008.

“The C-5 transport aircraft is flown by seven crew members.”

In May 2005, the USAF awarded Northrop Grumman a contract to provide a large aircraft infrared countermeasures (LAIRCM) Lite system for a trial installation on a C-5 aircraft.

LAIRCM is based on the AN/AAQ-24(V) NEMESIS and is being fitted to the USAF fleet of C-17 transport aircraft.

The aircraft is flown by seven crew members: the pilot and co-pilot, two flight engineers and three loadmasters.

Loading of the aircraft can be carried out by a straight-in loading into the front hold via the visor-type upward hinged nose and loading ramp under the flight deck. There is also a rear loading ramp which forms the underside of the rear fuselage. For ground loading and unloading the side panels of the rear fuselage are hinged for outward opening to provide wider access. The side panels and ramp are supplied by Canadair Limited.

The deck is fitted with aerial delivery systems for paratroop and cargo airdrop via the rear loading ramp door.

The lower deck can accommodate 270 troops. The passenger doors are fitted with Garrett Air Cruisers evacuation slides and four life rafts, each of 25-passenger capacity.

The cabins and decks are air conditioned and pressurised.

The C-5B aircraft is powered by four GE TF39GE-1C turbofan engines, each providing 191kN. The aircraft is also equipped with a Hamilton Sundstrand auxiliary power unit.

The aircraft has 12 integral fuel tanks installed between the front and back spars in the wings. The total fuel capacity is 193,624l. There are four refuelling points, with two installed in the forward section of each main landing gear pods.

The in-flight refuelling receive unit is compatible with the KC-135 and KC-10 tankers and is installed in the upper forward section of the fuselage over the flight engineer’s station.

The C-5 is fitted with retractable tricycle-type landing gear. The landing gear is fitted with Bendix oleo-pneumatic dual-chamber shock absorbers, Goodrich wheels, carbon disc brakes and modulated anti-skid units supplied by Hydro-Aire. The Goodrich tyres can be deflated in flight to suit the landing conditions at the destination airfield.

There are four main landing gear units fitted in tandem pairs. Each of the four main units has a six-wheel bogie with two wheels forward and four wheels rear of the shock absorber. The main units are rotated through 90° for inward retraction by a hydraulically-driven gear system.

The four-wheeled nosegear is equipped with robust hydraulically driven ball screw units to retract rearward. The nosegear is steerable through a 120º frontal arc, giving a ground turning radius of 22.10m about the nosewheel and 52.12m about the wingtip.

The C-5A is the original version of the C-5. From 1969 to 1973, 81 C-5As were delivered to the Military Airlift Command of the U.S. Air Force. Due to cracks found in the wings in the mid-1970s, the cargo weight was restricted. To restore the C-5’s full capability, the wing structure was redesigned. A program to install new strengthened wings on 77 C-5As was conducted from 1981 to 1987. The redesigned wing made use of a new aluminum alloy that did not exist during the original production. As of August 2016, there were 10 A-models in service flown by the Air Force Reserve Command’s 433d Airlift Wing at Lackland AFB / Kelly Field, Texas, and 439th Airlift Wing at Westover ARB, Massachusetts. The last operational C-5A was retired on 7 September 2017.

The C-5B is an improved version of the C-5A. It incorporated all modifications and improvements made to the C-5A with improved wings, simplified landing gear, upgraded TF-39-GE-1C turbofan engines and updated avionics. 50 examples of the new variant were delivered to the U.S. Air Force from 1986 to 1989.

The C-5C is a specially modified variant for transporting large cargo. Two C-5As (68-0213 and 68-0216) were modified following major accidents to have a larger internal cargo capacity to accommodate large payloads, such as satellites. The major modifications were the removal of the rear passenger compartment floor, splitting the rear cargo door in the middle, and installing a new movable aft bulkhead further to the rear. The official C-5 technical manual refers to the version as C-5A(SCM) Space Cargo Modified. Modifications also included adding a second inlet for ground power, which can feed any power-dependent equipment that may form part of the cargo. The two C-5Cs are operated by U.S. Air Force crews for DOD spacecraft programs and NASA, and are stationed at Travis AFB, California. Both C-5Cs #68-0213 and #68-0216 have been modified into C-5Ms as of 2017.

Following a study showing that 80% of the C-5 airframe’s service life was remaining, Air Mobility Command (AMC) began an aggressive program to modernize all remaining C-5Bs and C-5Cs and many of the C-5As. The C-5 Avionics Modernization Program (AMP) began in 1998 and includes upgrading the avionics to comply with Global Air Traffic Management standards, improving communications, fitting new flat-panel displays, improving navigation and safety equipment, and installing a new autopilot system. The first flight of a C-5 with AMP (85-0004) occurred on 21 December 2002.

Lockheed also planned a civilian version of the C-5 Galaxy, the L-500, the company designation also used for the C-5 itself. Both passenger and cargo versions of the L-500 were designed. The all-passenger version would have been able to carry up to 1,000 travelers, while the all-cargo version was predicted to be able to carry typical C-5 volume for as little as 2 cents per ton-mile (in 1967 dollars). Although some interest was expressed by carriers, no orders were placed for either L-500 version, due to operational costs caused by low fuel efficiency, a significant concern for a profit-making carrier, even before the oil crisis of the 1970s, keen competition from Boeing’s 747, and high costs incurred by Lockheed in developing the C-5 and later, the L-1011 which led to the governmental rescue of the company.

Lockheed proposed a twin body C-5 as a Shuttle Carrier Aircraft to counter the Conroy Virtus, but the design was turned down in favor of the Boeing 747. 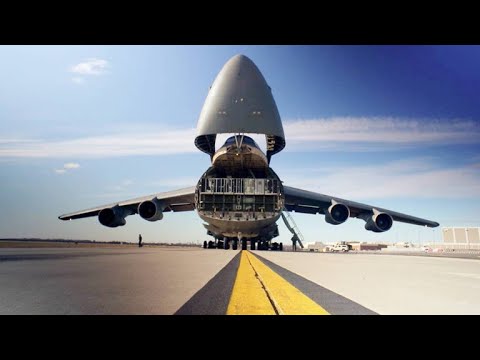 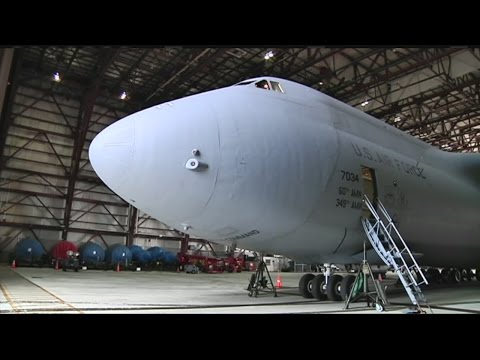 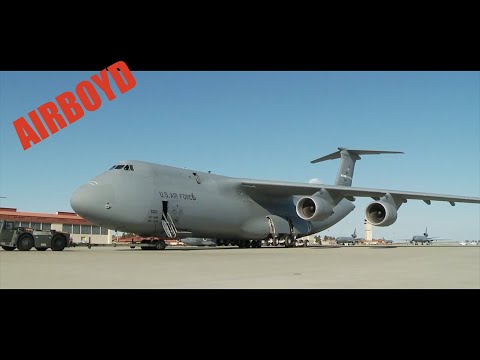 One thought on “C-5 Galaxy”