The Boeing F-15E dual-role fighter is an advanced long-range interdiction fighter and tactical aircraft. The F-15E is the latest version of the Eagle, a Mach 2.5-class twin-engine fighter. More than 1,500 F-15s are in service worldwide with the US Air Force, US Air National Guard and the air forces of Israel, Japan and Saudi Arabia, including over 220 F-15E fighters.

The F-15E Strike Eagle made its first flight in 1986. It is armed with air-to-air missiles that can be launched from beyond visual range, and has air-to-ground capability to penetrate hostile air and ground defences to deliver up to 24,000lb of precision ordnance. Since 2001, US Air Force F-15E aircraft have been almost exclusively used for close-air support.

In April 2001, Boeing received a contract for a further ten F-15E Strike Eagle aircraft for the USAF, bringing the total to 227. The air force initially planned to purchase 392 F-15s. The first production model of the F-15E was delivered to the 405th Tactical Training Wing, Luke Air Force Base, Arizona, in April 1988. The ‘Strike Eagle’, as it was dubbed, received initial operational capability on 30 September 1989.

Boeing is upgrading the programmable armament control set and software for the delivery of precision weapons like the joint direct attack munition (JDAM), joint stand-off weapon (JSOW) and the wind-corrected munition dispenser (WCMD).

In August 2008, the F-15E became the first fighter to fly powered by a blend of synthetic fuel and JP-8. The USAF intends to certify its entire fleet of aircraft for flight using the blended fuel by 2011.

Aerodynamic changes to the F-15SE will improve the aircraft’s aerodynamic efficiency and fighter performance by reducing overall airframe weight and drag. The RCS reduction methods are applied to the airframe for frontal aspect stealth capability thus improving mission effectiveness.

The internal carriage conformal fuel tanks (CFTs) can be quickly replaced by the large payload external carriage CFTs which are optimised for increased weapons load. The innovative Silent Eagle is a balanced, affordable design solution based on the combat-proven F-15 Eagle.

The F-15SE is capable of carrying electronic warfare, reconnaissance equipment, side-looking radar, and jamming equipment. The fighter plane’s reconfigurable capability provides enhanced combat flexibility. It is adaptable with each application reconfigurable every 30 minutes.

The elite F-15SE signature reduction methods are applied to the airframe for frontal aspect stealth capability, which ensure greater survivability in the battlefield. The F-15 family has a combat record of 101 victories and zero losses. The US Air Force’s F-15E has flown thousands of combat missions during worldwide combat operations.

In April 2002, the Republic of Korea chose the F-15K as its next-generation fighter. 40 aircraft, to be known as the ‘Slam Eagle’, have been ordered. The first flight of the F-15K took place in March 2005 and deliveries began in October 2005. The F-15K entered operational service in July 2008 and deliveries concluded in October 2008. It was confirmed in April 2008 that 21 more would be ordered in 2010, the quantity includes an additional aircraft to replace one which crashed in 2006.

The Republic of Korea has ordered Raytheon AIM-120 AMRAAM and AIM-9X Sidewinder air-to-air missiles and Boeing SLAM-ER stand-off land attack missiles for the new aircraft. First flight of a SLAM-ER, which has a range of 278km (150nm), onboard an F-15E took place in February 2004. In 2010, the Republic of Korea Air Force also plans to procure AGM-158 joint air-to-surface stand-off missiles (JASSM).

While F-15A/C aircraft are single-crew aircraft, F-15B/D/E have a crew of two. The F-15E Strike Eagle is crewed by the pilot and the weapon systems officer (WSO).

The WSO is equipped with two Sperry full-color and two Kaiser single-color cathode ray tubes. The WSO can access information from the radar, electronic warfare or infrared sensors, and monitor aircraft or weapons status and possible threats. The WSO also selects targets and navigates with the aid of a moving map display, produced by an AlliedSignal remote film strip reader.

USAF F-15s are scheduled to receive the joint helmet-mounted cueing system (JHMCS) developed by Vision Systems International. A contract for 145 systems was placed in July 2008. Deliveries are underway and are scheduled to conclude in mid-2009.

Ranges for these missiles are: Sidewinder: 8km; Sparrow: 45km; and AMRAAM: 50km.

The first units of GBU-15 glide bomb upgraded with Global Positioning System (GPS) guidance have been delivered for deployment on the F-15E. The Joint Direct Attack Munition (JDAM) was cleared for carriage on the F-15E in February 2005. The aircraft will also be able to carry the Lockheed Martin AGM-158 joint air-to-aurface atand-off missile.

The F-15E is the first aircraft to be armed with the Boeing GBU-39 GPS-guided 113kg (250lb) small diameter bomb. Up to 12 bombs can be carried. The SDB entered Low-Rate Initial Production (LRIP) in April 2005 and achieved Initial Operating Capability (IOC) on the F-15E in September 2006.

The aircraft is also armed with an internal General Dynamics M-61A1 20mm Gatling gun installed in the right wing root, which can fire 4,000 or 6,000 shots a minute.

USAF F-15Es are being fitted with the upgraded Raytheon APG-63(V)3 Active Electronically Scanned Array (AESA) radar which has a new transmitter, receiver, data processor and signal data converter. The first was delivered to Boeing for flight tests in September 2006.

The F-15E is fitted with the Lockheed Martin LANTIRN navigation and targeting system. The LANTIRN navigation pod contains a Forward-Looking Infrared (FLIR) sensor, which produces video images that are projected onto the pilot’s HUD, and terrain-following radar. The LANTIRN system can be coupled to the flight control system for hands-off terrain, following at altitudes as low as 200ft. The LANTIRN targeting pod contains a tracking FLIR and laser designator.

After obtaining a radar image of the target area, the F-15E aircrew can designate targets by positioning a cursor on the radar display. The target data is transferred to the LANTIRN system for use by the tracking FLIR, which enables aiming of air-to-ground weapons from up to ten miles. Target tracking data is handed automatically to precision-guided weapons such as low-level laser-guided bombs, which can be guided to the target after release.

“The F-15E is equipped with an integrated internal electronic warfare suite.”

Operational deployment of the Sniper pod on the F-15E began in January 2005, in support of Operation Iraqi Freedom.

The F15E is equipped with a triple-redundant BAE SYSTEMS Astronics flight control system. Using manual terrain following, navigation is possible over rough terrain at altitudes down to 200ft, at nearly 600mph, with the pilot following commands from the LANTIRN system. Automatic terrain following is accomplished through the flight control system linked to the LANTIRN navigation pod’s terrain-following radar. 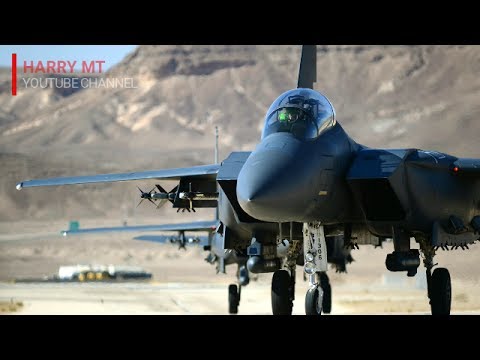 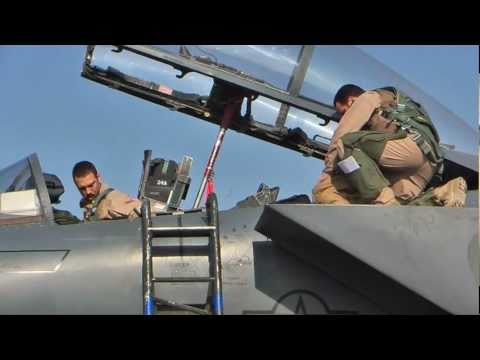