The first three AWDs are named HMAS Hobart, HMAS Brisbane and HMAS Sydney. The first AWD was launched in May 2015 and commissioned into the RAN in September 2017.

The keel of HMS Brisbane was laid down in February 2014, while its launching ceremony was held in December 2016. The ship was delivered to the navy in August 2018 and inducted into the RAN two months later. The keel-laying ceremony for the third ship, HMAS Sydney, was held in November 2015 and the destroyer was launched in May 2018.

The $8bn AWD project is the largest defence procurement project ever undertaken in Australia. It is expected to create 3,000 jobs in Australia and benefit thousands of companies based in the country.

The Hobart Class AWD programme is intended to deliver an affordable, effective, flexible and sustainable air warfare destroyer platform to the RAN. The requirement for modern warships was established by the Kinnaird Review in 2003. Gibbs & Cox and Navantia submitted warship designs to the Commonwealth Government.

The Australian Government selected ASC as the shipbuilder for the programme in May 2005. In June 2007, the existing design of Navantia was selected as a platform for the AWD programme. ASC entered an alliance-based contract with the Defence Materiel Organisation and Raytheon Australia. The project has passed the critical design review in January 2010.

“The AWD platform is based on the Navantia-designed F100 frigate.”

The AWD platform is based on the Navantia-designed F100 frigate, which is in service with the Spanish Navy. The baseline design has been slightly modified for Australian applications, including the displacement of the AWD being increased to 7,000t, and the hangar modified to accommodate a range of helicopters.

The AWD Alliance subcontracted the FORGACS group and NQEA Australia as the preferred suppliers to build 70% of the blocks. In June 2009, the work allotted to the NQEA was transferred to BAE Systems Australia due to financial obligations.

The ships are being built using a modular construction method. The hull blocks of three destroyers are being constructed at three shipyards, including ASC in Osborne, BAE Systems in Melbourne and Forgacs in Newcastle. The assembling, outfitting, equipment and systems installation, as well as trial activities, will be carried out at the newly opened ASC Osborne shipyard.

A total of 31 blocks are being constructed for each ship, of which 70% are built by BAE Systems and Forgacs, and the remaining by ASC. ASC’s facility located north-west of Adelaide’s CBD will fabricate nine blocks for each ship. Work is currently underway on six blocks including decking and superstructure components.

Seven of the 12 main keel blocks are fabricated for each ship at Melbourne and Victoria facilities of BAE Systems. Forgacs fabricates ten blocks for each ship in Newcastle. Accommodation modules for all the ships are being built by Taylor Brothers in Hobart.

In June 2010, AWD Alliance signed a $25m contract with Toll North to transport 66 hull blocks from Newcastle and Melbourne to Osborne Shipyard for assembly. BlueScope Steel has been contracted to supply 3,000t of steel required for the ship construction.

The Hobart-class AWDs provide air defence for vessels, land-based forces and infrastructure in coastal lines. It will also defend and destroy missiles and aircraft within a range of 150km. The destroyers can also be deployed in law enforcement operations, defence aid to the civil community, the collection of environmental data, rescue operations and diplomatic roles.

“The Hobart-class will provide air defence for vessels.”

The AWD is fitted with a BAE Systems Mk 45 5in 62 calibre gun and a Phalanx Block 1B close-in weapons system (CIWS).

The Hobart-class features a flight deck and a hangar to enable helicopter and UAV operations. The existing hangar design will be modified to carry a wide range of helicopters.

“The Hobart-class will be equipped with advanced sonar systems and decoys.”

The destroyer is equipped with an ES-3701 tactical radar electronic support measures (ESM) and surveillance system. In December 2008, the AWD Alliance awarded a contract for the supply of a decoy launching system to Terma. Four deck-mounted MK-137 130mm decoy launchers can fire decoys to deceive incoming anti-ship missiles. Other countermeasures include Nulka active missile decoy launchers and ASW torpedo decoys.

The AWD is equipped with a combined diesel and gas (CODAG) propulsion system with two GE LM 2500 gas turbines and two diesel engines. It is also fitted with a bow thruster for improved manoeuvrability. 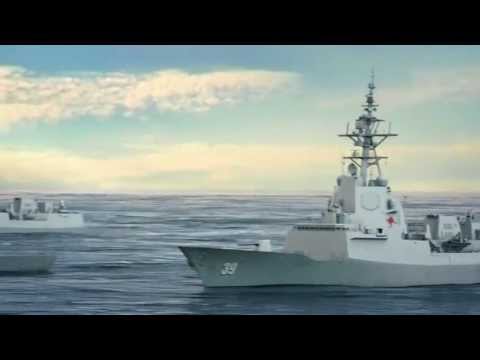 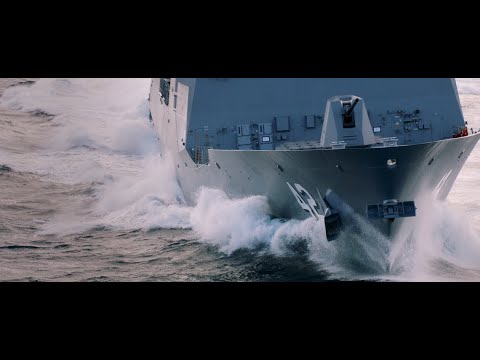