The FV4034 Challenger 2 (MOD designation “CR2”) is a third generation British main battle tank (MBT) in service with the armies of the United Kingdom and Oman. It was designed and built by the British company Vickers Defence Systems (now known as BAE Systems Land & Armaments).

The Challenger 2 is equipped with a 120-millimetre (4.7 in) 55-calibre long L30A1 tank gun, the successor to the L11 gun used on the Chieftain and Challenger 1. Unique among NATO main battle tank armament, the L30A1 is rifled, because the British Army continues to place a premium on the use of High-explosive squash head (HESH) rounds in addition to armour-piercing fin-stabilised discarding-sabot rounds. The Challenger 2 is also armed with a L94A1 EX-34 7.62 mm chain gun and a 7.62 mm L37A2 (GPMG) machine gun. Fifty main armament rounds and 4,200 rounds of 7.62 mm ammunition are carried.

The Challenger 2 has a four-man crew. The turret and hull are protected with second generation Chobham armour (also known as Dorchester). On one occasion, in August 2006, during the post-invasion stage of the Iraq War, an RPG-29 was fired at a Challenger 2 that was climbing over a ramp. The armour on its front underside hull, which was augmented with an explosive reactive armour package, was damaged, injuring several crew members. The tank subsequently returned to base under its own power and was quickly repaired and back on duty the following day. As a response to the incident, the explosive reactive armour package was replaced with a Dorchester block and the steel underbelly lined with armour as part of the “Streetfighter” upgrade. To date, the only time the tank has been destroyed during operations was by another Challenger 2 in a “blue on blue” (friendly fire) incident at Basra in 2003 when the destroyed tank had its hatch open at the time of the incident.

It has seen operational service in Bosnia and Herzegovina, Kosovo and Iraq.

Since entering service, various upgrades have sought to improve the Challenger 2’s protection, mobility and lethality, the most recent of which being the Life Extension Programme (LEP). In March 2021, the British Army announced plans to upgrade 148 Challenger 2’s under LEP with the aim to extend its service life out to at least 2035. The British Army has designated these upgraded models Challenger 3.

The Challenger 2 is equipped with a 120-millimetre (4.7 in) 55-calibre long L30A1 tank gun, the successor to the L11 gun used on Chieftain and Challenger 1. The gun is made from high strength electro-slag remelting (ESR) steel with a chromium alloy lining and, like earlier British 120 mm guns, it is insulated by a thermal sleeve. It is fitted with a muzzle reference system and fume extractor, and is controlled by an all-electric control and stabilization system. The turret has a rotation time of 9 seconds through 360 degrees.

Uniquely among NATO main battle tank armament, the L30A1 is rifled and along with its predecessor, Royal Ordnance L11A5, the only Third Generation Main Battle Tank Guns to use a rifled barrel. This is because the British Army continues to place a premium on the use of high explosive squash head (HESH) rounds in addition to Armour-piercing fin-stabilized discarding-sabot rounds. HESH rounds have a longer range (up to 8 kilometres or 5 miles further) than APFSDS, and are more effective against buildings and thin-skinned vehicles.

Forty-nine main armament rounds are carried in the turret and hull; these are a mix of L27A1 APFSDS (also referred to as CHARM 3), L31 HESH and L34 white phosphorus smoke rounds, depending on the situation. As with earlier versions of the 120 mm gun, the propellant charges are loaded separately from the shell or KE projectile. A combustible rigid charge is used for the APFSDS rounds and a combustible hemispherical bag charge for the HESH and Smoke rounds. An electrically fired vent tube is used to initiate firing of the main armament rounds. (The main armament ammunition is thus described to be “three-part ammunition”, consisting of the projectile, charge and vent tube.) The separation of ammunition pieces also aids in ensuring lower chances of ammunition detonation.

The Challenger 2 is also armed with a L94A1 EX-34 7.62 mm chain gun coaxially to the left of the main gun, and a 7.62 mm L37A2 (GPMG) machine gun mounted on a pintle on the loader’s hatch ring. 4,200 rounds of 7.62 mm ammunition are carried. The Challenger can also mount a Leonardo “Enforcer” remote control weapons system bearing a 7.62 mm L37A2 (GPMG) machine gun, a 12.7mm heavy machine gun or a 40mm automatic grenade launcher.

The digital fire control computer from Computing Devices Co of Canada contains two 32-bit processors with a MIL STD1553B databus, and has capacity for additional systems, such as a Battlefield Information Control System.

The commander has a panoramic SAGEM VS 580-10 gyrostabilised sight with laser rangefinder. Elevation range is +35° to −35°. The commander’s station is equipped with eight periscopes for 360° vision.

The Thermal Observation and Gunnery Sight II (TOGS II), from Thales, provides night vision. The thermal image is displayed on both the gunner’s and commander’s sights and monitors. The gunner has a stabilised primary sight using a laser rangefinder with a range of 200 m (660 ft) to 10 km (6.2 mi). The driver’s position is equipped with a Thales Optronics image-intensifying Passive Driving Periscope (PDP) for night driving and a rear view thermal camera.

The Challenger 2 is a heavily armoured and well protected tank. The turret and hull are protected by second generation of Chobham armour (also known as Dorchester), the details of which are classified but which is said to have a mass efficiency more than two times that of rolled homogeneous armor against high explosive anti tank projectiles. Crew safety was paramount in the design, using a solid state electric drive for its turret and gun movement, thus removing the traditional risk of hydraulic rupture into the crew compartment. Explosive reactive armour kits are also fitted as necessary along with additional bar armour. The nuclear, biological and chemical (NBC) protection system is located in the turret bustle. The tank’s shape is also designed to minimise its radar signature. On each side of the turret are five L8 smoke grenade dischargers. The Challenger 2 can also create smoke by injecting diesel fuel into the exhaust manifolds.

The tank is also fitted with an Extel Systems Wedel APU (Auxiliary Power Unit – also referred to as a GUE [Generating Unit Engine]) based around a 38 kW Perkins P404C-22 Diesel engine, with a 600 A electrical output which can be used to power the vehicle’s electrical systems when it is stationary and the main engine is switched off, this replaces the Perkins P4.108 engine fitted when the tank was first introduced. The use of an APU allows for reduced fuel consumption and lowers the audio and thermal signature of the vehicle.

As of 2013, the British Army has, at various events featuring the Challenger 2, begun to state the on-road range of 550 km as opposed to an earlier stated value of 450 km. They have also publicly stated a maximum road speed of 59 km/h while equipped with 15 tons of additional modules.

The British Army maintained its requirement for a four-man crew (including a loader) after risk analysis of the incorporation of an automatic loader suggested that auto-loaders reduced battlefield survivability. Mechanical failure and the time required for repair were prime concerns.

Similar to every British tank since the Centurion, and most other British AFVs, Challenger 2 contains a boiling vessel (BV) for water, which can be used to brew tea, ramen or produce other hot beverages and heat boil-in-the-bag meals contained in field ration packs. This BV requirement is general for armoured vehicles of the British Armed Forces, and is unique to the armed forces of the UK and India.

The Titan armoured bridge layer is based on aspects of the Challenger 2 running gear and replaced the Chieftain Armoured Vehicle Launched Bridge (ChAVLB). The Titan came into service in 2006 with the Royal Engineers, with 33 in service. Titan can carry a single 26-metre-long bridge or two 12-metre-long bridges. It can also be fitted with a bulldozer blade.

The Trojan Armoured Vehicle Royal Engineers is a combat engineering vehicle designed as a replacement for the Chieftain AVRE (ChAVRE). It uses the Challenger 2 chassis, and carries an articulated excavator arm, a dozer blade, and attachment rails for fascines. Entering service in 2007, 33 were produced.

The Challenger 2E is an export version of the tank. It has a new integrated weapon control and battlefield management system, which includes a gyrostabilised panoramic SAGEM MVS 580-day/thermal sight for the commander and SAGEM SAVAN 15 gyrostabilised day/thermal sight for the gunner, both with eyesafe laser rangefinder. This allows hunter/killer operations with a common engagement sequence. An optional servo-controlled overhead weapons platform can be slaved to the commander’s sight to allow operation independent from the turret.

The power pack has been replaced by a new 1,500 hp (1,100 kW) EuroPowerPack with a transversely mounted MTU MT883 diesel engine coupled to Renk HSWL 295TM automatic transmission. The increase in both vehicle performance and durability is significant. The smaller volume but more powerful Europowerpack power pack additionally incorporates as standard a cooling system and air-intake filtration system proved in desert use. The free space in the hull is available for ammunition stowage or for fuel, increasing the vehicle’s range to 550 km (340 mi). This powerpack was previously installed on the French Leclerc tanks delivered to the UAE as well as the recovery tank version of the Leclerc in service with the French Army. Further developed versions of the Europowerpack have more recently been installed in the latest serial produced Korean K2 Black Panther tank as well as the new Turkish ALTAY tank.

BAES announced in 2005 that development and export marketing of 2E would stop. This has been linked by the media to the failure of the 2E to be selected for the Hellenic Army in 2002, a competition won by the Leopard 2.

The Challenger Armoured Repair and Recovery Vehicle (CRARRV) is an armoured recovery vehicle based on the Challenger 1 hull (with the updated Challenger 2 powertrain) and designed to repair and recover damaged tanks on the battlefield. It has five seats but usually carries a crew of three soldiers from the Royal Electrical and Mechanical Engineers (REME), of the recovery mechanic and vehicle mechanic/technician trades. There is room in the cabin for two further passengers (e.g. crew members of the casualty vehicle) on a temporary basis.

The size and performance are similar to the MBT, but instead of armament it is fitted with:

The design prototype is on display at The REME Museum at MoD Lyneham, Wiltshire. 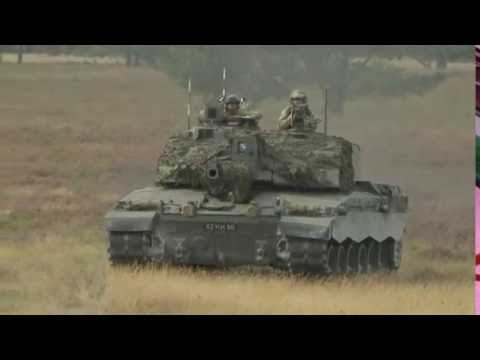 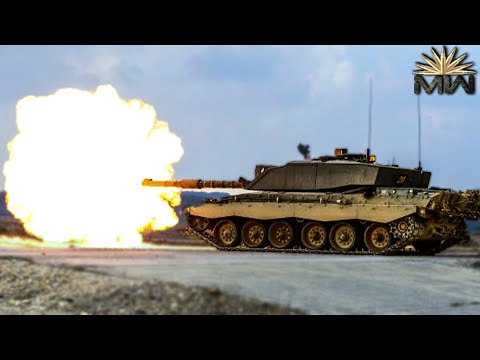 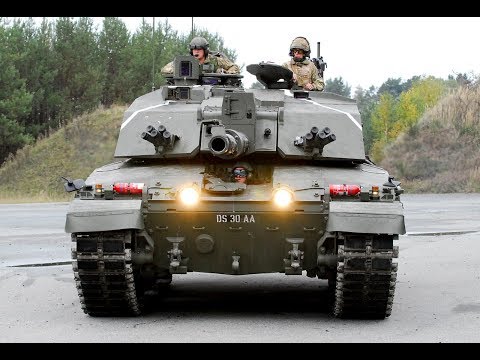