For the M1A2 upgrade programme, more than 600 M1 Abrams tanks were upgraded to M1A2 configuration at the Lima Army tank plant between 1996 and 2001. Deliveries began in 1998.

In March 2004, the Australian Army announced the purchase of 59 US Army M1A1 tanks to enter service from 2007. The contract was signed in November 2005 and the first five were handed over in February 2006 at GDLS in Lima, Ohio.

The first 18 tanks were delivered to the Australian Army at the School of Armour in Victoria in September 2006. The remaining 41, to be based in Darwin, were delivered in March 2007.

In June 2006, Saudi Arabia requested the foreign military sale of 58 M1A1 tanks and the upgrade of these and the 315 M1A2 already in the Saudi inventory to the M1A2S configuration. The upgrade involves rebuilding to a ‘like new’ condition, similar to the US Army Abrams integrated management programme (AIM).

GDLS was awarded a $349m contract in January 2008 for the production of 125 M1A1 tank kits under the tenth increment of the Egyptian co-production programme. Deliveries began in April 2009.

In July 2008, the Iraqi Government requested the sale of 140 M1A1 tanks to be upgraded to the M1A1M configuration. The Iraqi Army received the final shipment of five M1A1 Abrams tanks in August 2011.

Honeywell is improving the performance of the AGT 1500 engines of M1 Abrams tanks under a one-year extension contract awarded by the US Army in August 2009. The company worked with the army on the total integrated engine revitalisation (TIGER) programme of about 750 engines. The value of the fourth-year contract is around $300m, with the total contract value amounting to $1.4bn.

In October 2009, GDLS was awarded a $58m contract by the US Army for providing systems technical support (STS) for the Abrams tank.

In December 2009, GDLS received a $17.6m contract from Saudi Arabia for the purchase of long-lead materials used for converting 15 M1A2 Abrams tanks to M1A2S tanks.

The US Army TACOM LCMC awarded a $37m contract to GDLS in March 2010 for providing STS services for the Abrams tanks. The work includes identifying improvements and replacing obsolete parts of the tanks.

The sensor increases soldier safety and effectiveness in urban areas. It also enables soldiers to fire the tank’s machine gun from inside the armoured vehicle.

The US Defense Logistics Agency (DLA) awarded a $9.5m contract to GDLS for providing spares in support of Abrams battle tanks in April 2013. GDLS secured a $56m contract modification in September 2013 to continue logistics and basic life cycle-support services to M1A1 Abrams tanks in service with Iraqi forces. The contract related works were completed in October 2013.

GDLS received a $99.7m contract from the US Army TACOM LCMC on behalf of the Royal Saudi Land Forces for the procurement and production of Saudi M1A2 (M1A2S) Abrams

tanks. The contract awarded in December 2014, extends work started in 2008 to update M1A1 and M1A2 tanks to the M1A2S configuration.

The US Army TACOM LCMC on behalf of Morocco awarded a $358m contract to GDLS in September 2015 to refurbish and upgrade 150 M1A1 Abrams tanks to the M1A1 SA configuration, under FMS.

GDL won a $2.6bn contract from the US Army to upgrade up to 786 M1A1 Abrams to the newly configured M1A2 System Enhancement Package Version 3, in December 2017.

The US Government approved a potential sale of 108 M1A2T Abrams tanks and other equipment to Taiwan in July 2019.

Under the firepower enhancement package (FEP), DRS Technologies was also awarded a contract for the GEN II TIS to upgrade US Marine Corps M1A1 tanks. GEN II TIS is based on the 480×4 SADA (standard advanced dewar assembly) detector.

In November 2007, General Dynamics was awarded a contract for the upgrade of 240 M1A2 SEP version one tanks to the version two configuration which has improved sights, displays and a tank-infantry phone. The first was ready in October 2008 and the work was completed in September 2009.

In 2008, Saudi Arabia awarded a $58m contract to GDLS to design, develop, convert, implement and test a hybrid configuration of the M1A1, M1A2 and M1A2 SEP tank variants.

In February 2014, GDLS received a $72.7m contract from the US Army TACOM LCMC to upgrade 12 M1A1 Abrams tanks to the M1A2 SEPV2 configuration. The contract was

awarded as part of the agreement signed in February 2008, which allows upgrade of 435 M1A1 tanks.

In June 2004, DRS Technologies was awarded a contract to provide systems including rugged appliqué computers for the M1A2 Abrams tanks (and M2A3 Bradley fighting vehicles) as part of the US Army’s Force XXI battle command, brigade and below (FBCB2) programme. FBCB2 is a digital battle command information system which provides enhanced interoperability and situational awareness from brigade to individual soldier that will be used in conjunction with the army’s tactical internet.

The top panels of the tank are designed to blow outwards in the event of penetration by a HEAT projectile. The tank is protected against nuclear, biological and chemical (NBC) warfare.

One L8A1 six-barrelled smoke grenade discharger is fitted on each side of the turret. A smoke screen can also be laid by an engine-operated system.

In August 2006, GDLS was awarded a contract to produce 505 tank urban survivability kits (TUSK) for the US Army Abrams tanks.

The Northrop Grumman (formerly Litton) Laser Systems eyesafe laser range finder (ELRF) has a range accuracy to within 10m and target discrimination of 20m. The gunner also has a Kollmorgen Model 939 auxiliary sight with magnification ×8 and field of view 8°.

The fire control computer automatically calculates the fire control solution based on the lead angle measurement, bend of the gun measured by the muzzle reference system, velocity measurement from a wind sensor on the roof of the turret and data from a pendulum static cant sensor located at the centre of the turret roof.Data on ammunition type, temperature and barometric pressure is manually inputted by the operator

The driver has either three observation periscopes or two periscopes on either side and a central image intensifying periscope for night vision. The periscopes provide 120° field of view.

The DRS Technologies driver’s vision enhancer (DVE), AN/VSS-5, is based on a 328×245 element uncooled infra-red detector array, operating in the 7.5 to 13 micron waveband. A Raytheon driver’s thermal viewer, AN/VAS-3, is installed on the M1A2 Abrams tanks for Kuwait.

The US Army has selected Honeywell International Engines and Systems and General Electric to develop a new LV100-5 gas turbine engine for the M1A2. The new engine is lighter and smaller with rapid acceleration, quieter running and no visible exhaust. 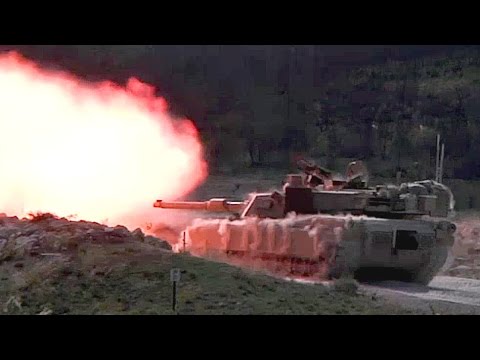 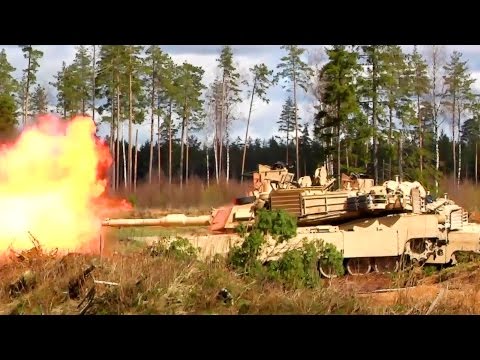 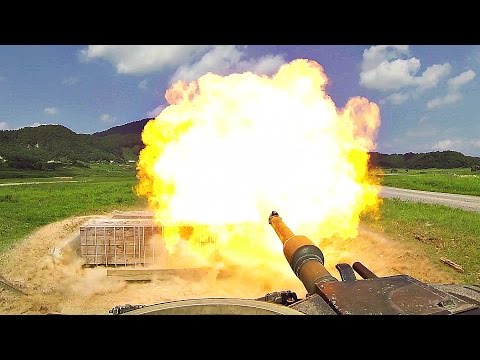