The Ohio Class submarines serve the US Navy as virtually undetectable undersea launch platforms of intercontinental missiles. The Electric Boat Division of General Dynamics based at Groton, Connecticut, built 18 Ohio submarines commissioned between 1981 and 1997.

The submarines of the Pacific Fleet are based at Bangor, Washington, and those of the Atlantic Fleet at King’s Bay, Georgia. The submarines spend 70 days at sea followed by 25 days in the dock for overhaul.

According to the requirements of the Strategic Arms Reduction Treaty, START II, which was agreed in June 1992, the number of strategic missile submarines was limited to 14 from 2002. Rather than decommissioning these four submarines, the US Navy has converted them to conventionally armed nuclear-powered (SSGNs) submarines.

Northrop Grumman Electronic Systems is adapting the missile launch tubes, developing a multiple all-up round canister (MAC), which provides storage and launch of up to seven Tomahawk missiles from each of the submarine’s 22 missile tubes. The SSGN submarines are also fitted with the Raytheon AN/BYG-1 combat data system.

USS Ohio began conversion in November 2002, which was completed in January 2006, when the ship rejoined the fleet following sea trials in December 2005. USS Florida began the SSGN conversion in July 2003 and rejoined the fleet in April 2006. USS Michigan returned to service in June 2007. USS Georgia was delivered from conversion in December 2007 and returned to service in March 2008. SSBN’s USS Pennsylvania and USS Kentucky have shifted homeport from Kings Bay to Bangor to balance the strategic force.

In November 2007, USS Ohio left for final trials off Hawaii before beginning its first operational deployment as an SSGN in the western Pacific Ocean.

In January 2003, USS Florida took part in Naval Sea Systems Command (NAVSEA) experiment ‘Giant Shadow’ to test the capabilities of the new SSGNs. The experiment included validation launches of two Tomahawk missiles, the first-ever launch of an unmanned underwater vehicle (UUV) and insertion of a navy SEALs force. The SSGN will have the capacity to accommodate 66 SEALS.

The Northrop Grumman advanced SEAL delivery system (ASDS) is a submersible for the delivery of US Navy SEALs and combat gear to the shore. Each Ohio SSGN had its two forward-most missile tubes converted into ASDS capable lock-out chambers. ASDS is equipped with multiple sonars, GPS/ inertial navigation, communications and electronic support measures (ESM). It was also fitted to Los Angeles Class submarines USS Charlotte (SSN-766) and the USS Greeneville (SSN-772) and will equip the Virginia Class SSNs.

In March 2008, USS Michigan successfully completed the operational evaluation of ASDS across a range of operational conditions.

Ohio Class submarine is equipped with the Trident strategic ballistic missile from Lockheed Martin Missiles and Space. The Trident was built in two versions, Trident I (C4), which is being phased out, and the larger and longer-range Trident II (D5), which entered service in 1990.

The submarines received the new D5LE missiles in 2013 under the D5 life extension programme. The new missiles are expected to remain in service till the 2040s.

The first eight submarines, (SSBN 726 to 733 inclusive) were equipped with Trident I and the following ten (SSBN 734 to 743) carry the Trident II. Conversion of the four Trident I submarines remaining after START II (Henry M Jackson, Alabama, Alaska and Nevada) to Trident II began in 2000 and was completed in 2008.

Lockheed Martin received a contract in January 2002 for the production of 12 Trident II missiles for the four submarines.

The submarine has the capacity for 24 Trident missile tubes in two rows of 12. The dimensions of the Trident II missile are 1,360cm-long with a diameter of 210cm and the weight is 59,000kg. The three-stage solid-fuel rocket motor is built by Alliant Techsystems (ATK) Thiokol Propulsion.

The US Navy describes the range as ‘greater than 7,360km’ but this could be up to 12,000km, depending on the payload mix. Missile guidance is provided by an inertial navigation system supported by stellar navigation.

Trident II is capable of carrying up to 12 multiple independent re-entry vehicles (MIRVs), each with a yield of 100k, although the SALT treaty limits this number to eight a missile. The circle of equal probability (the radius of the circle, within which half the strikes will impact) is less than 150m. The Sperry Univac Mark 98 missile control system controls the 24 missiles.

The Ohio Class submarine is fitted with four 533mm torpedo tubes with an mk118 digital torpedo fire control system. The torpedoes are the Gould mk48.

The mk48 is a heavyweight torpedo with a warhead of 290kg, which has been operational in the US Navy since 1972. The torpedo can be operated with or without wire guidance and the system has active and / or passive acoustic homing.

The range is up to 50km at a speed of 40k. After launch, the torpedo carries out target search, acquisition and attack procedures delivering to a depth of 3,000ft.

The Ohio Class submarine is equipped with eight launchers for the mk2 torpedo decoy. Electronic warfare equipment is the WLR-10 threat warning system and the WLR-8(V) surveillance receiver from GTE of Massachusetts.

The WLR-8(V) uses seven YIG-tuned and vector-tuned superheterodyne receivers to operate from 50MHz up to J-band. An acoustic interception and countermeasures system, AN/WLY-1 from Northrop Grumman, was developed to provide the submarine with an automatic response against torpedo attack.

The Ohio submarines were upgraded with the Lockheed Martin AN/BQQ-10(V4) sonar processing system under the acoustic-rapid commercial-off-the-shelf insertion (A-RCI) programme.

The main machinery is the pressure water reactor GE PWR S8G with two turbines, providing 60,000hp and driving a single shaft. The submarine is equipped with a 325hp Magnatek auxiliary prop motor. The propulsion provides speed in excess of 18k surfaced and 25k submerged. 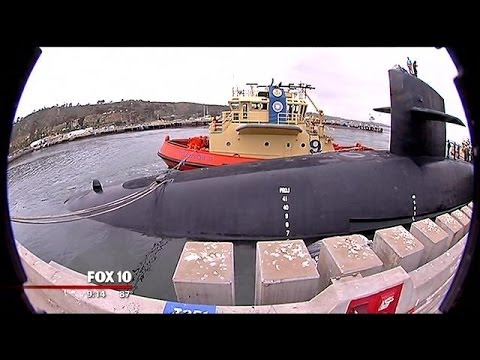 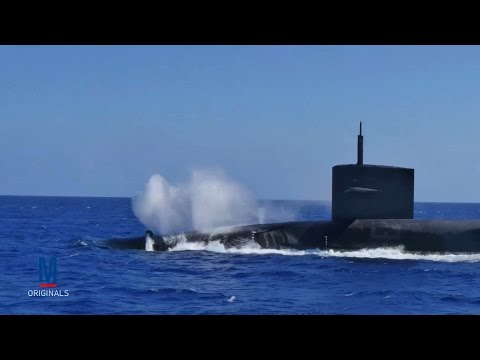