The San Antonio Class landing platform dock is the latest class of amphibious force ship for the US Navy.

The mission of the San Antonio Class is to transport the US Marine Corps ‘mobility triad’, comprising advanced amphibious assault vehicles (AAAVs), landing craft air cushion (LCAC) and the MV-22 Osprey tilt-rotor aircraft, to trouble spots around the world.

The US Navy has commissioned 11 San Antonio Class LPD flight I ships to date.

Construction of the first ship of 12, the San Antonio (LPD 17), began in June 2000. The ship’s keel was laid in December 2000. It was launched in July 2003 and commissioned in January 2006. The San Antonio is home-ported at the Norfolk naval base, Virginia. The vessel achieved initial operating capability (IOC) in May 2008 and made its first deployment in August 2008 as part of the Iwo Jima expeditionary strike group.

The keel for USS New York (LPD 21) was laid in September 2004. It was launched in December 2007 and commissioned in November 2009. Construction of USS New York included 24t of steel salvaged from the wreckage of the World Trade Center, as a memorial to those who lost their lives in New York on 11 September 2001.

“The mission of the San Antonio Class is to transport the US Marine Corps ‘mobility triad’.”

USS Anchorage was laid in September 2007, launched in February 2011 and delivered to the US Navy in September 2012. It was commissioned into the Navy in May 2013.

USS Arlington’s keel was laid in May 2008 and launched in November 2010. It successfully completed builder’s trials in August 2012 and was delivered to the US Navy in December 2012. The LPD was commissioned in April 2013.

The keel of the USS Somerset was laid in December 2009. It was launched in April 2012 and christened in July 2012. The LPD was delivered to the US Navy in October 2013 and commissioned in March 2014. It is home-ported at Naval Base San Diego.

In July 2012, Huntington Ingalls Industries was awarded a $1.5bn contract by the US Navy for construction of the 11th ship in the class, the Portland (LPD 27).

In December 2016, Huntington Ingalls Industries received a $1.46bn contract for the design and construction of USS Fort Lauderdale (LPD 28). The keel for the vessel was laid in October 2017.

The shipyard was awarded a $1.43bn detail design and construction contract for Richard M McCool Jr (LPD 29) in February 2018.

In August 2018, Huntington Ingalls Industries received a $165.5m contract to acquire long-lead-time material and perform advance construction activities of LPD 30 ship. It will be the first Flight II LPD of the class.

LPD-17 Flight II is the latest version of the San Antonio class. It is being built to meet the operational requirements of the US Navy and Marine Corps. The vessels will incorporate minor modifications to feature a ship-to-shore connector, CH-53K helicopter and improved troop armament stowage.

The LPD 28 and 29 ships will incorporate few design changes as part of the transition from Flight I to Flight II class.

The US Navy plans to procure 13 LPD-17 Flight II ships, which will replace the ageing LSD 41/49 class vessels.

In December 1996, the US Navy awarded a contract to an industrial alliance led by Northrop Grumman Ship Systems (formerly Litton Avondale), with General Dynamics Bath Iron Works, Raytheon Electronic Systems and Intergraph Corporation, to design and construct the first of an anticipated 12 ships under the navy’s LPD 17 programme.

It was planned that Avondale would build eight and Bath Iron Works four ships.

However, in June 2002, the US Navy signed an MoU with Northrop Grumman and Bath Iron Works, making Northrop Grumman responsible for the construction of all San Antonio Class vessels. Bath is the builder of four Arleigh Burke destroyers, previously assigned to Northrop Grumman.

In December 2015, Ingalls Shipbuilding received a $34.8m contract for engineering and support services for LPD 17 and a $200m contract to provide long-lead-time material and main equipment for LPD 28.

AMSC secured a contract to deliver a ship protection system for LPD 28 in January 2019.

The ship is constructed from steel and designed to minimise radar cross-section.

Enhanced survivability features include improved fragmentation and nuclear blast protection as well as a shock-hardened structure. Automation and integration of systems have enabled a significant reduction in the crew, projected to be 361.

Accommodation is provided for two LCAC, 700 troops and 14 new AAAVs. Each LCAC is capable of carrying 60t of cargo and vehicles, including the M1A2 Abrams tank, at speeds of up to 40k.

The ship’s advanced enclosed mast / sensor (AEM / S) system consists of two large eight-sided structures, which house the radar and communications antennae with a hybrid frequency-selective surface. As well as reducing the ship’s radar cross-section, the AEM / S system also protects the equipment from exposure to the elements.

It has a range of 8km. Space and weight provision has been made for the future fitting of a vertical launcher for the evolved Seasparrow missile (ESSM) if required.

The ship is equipped with two mk46 mod 2 30mm guns for close-in surface self-defence. The mk46 is a dual-axis stabilised chain gun with a firing rate of up to 250 rounds a minute. The fire director includes a thermal imager, low-light TV camera and laser rangefinder, with a closed-loop tracking system.

The gun can be operated locally at the gun turret or remotely in the combat information centre. Additional armament includes two mk26 mod 18 50-calibre machine guns.

San Antonio is one of the classes of vessels to receive the SSDS (ship self-defence system) mk2 developed by Raytheon for the US Navy. SSDS is an integration of all the ship’s self-defence systems and includes multifunction radar, advanced integrated electronic warfare system and an infrared search-and-track (IRST) system.

LPD 22, the sixth of the class, is the first ship to receive the complete system, which will be retrofitted to the rest of the class. SSDS is also to be fitted to the US Navy new carriers (CVN 76) and destroyers (DD-X).

The ship is equipped with a fibre-optic shipboard wide area network (SWAN) from Raytheon, which connects ship systems, sensors and combat systems to the ship’s command consoles.

The ship is equipped with the AN / SLQ-25A Nixie towed decoy system from Argon ST of Fairfax, Virginia, and the mk53 Nulka decoy launching system developed by the Australian Defence Science and Technology Organisation in Canberra and Lockheed Martin Sippican in Massachusetts.

Nulka is a hovering rocket system, which deflects incoming missiles away from the ship. The Raytheon AN / SLQ-32A (V) 2 electronic support measures (ESM) system is a detection and jamming system providing surveillance, warning and electronic countermeasures against missile attack. 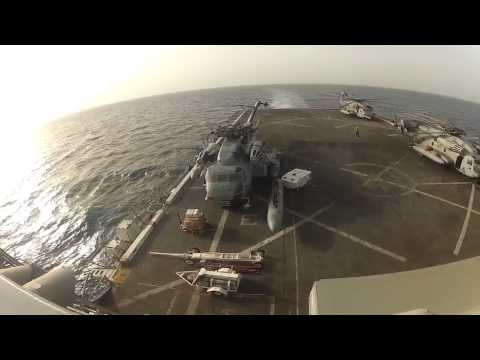 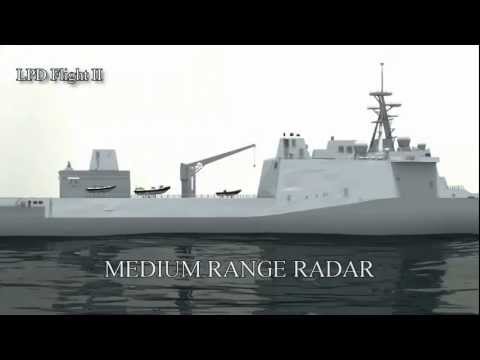 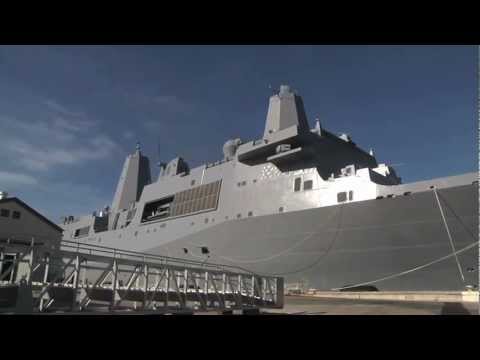