The Sikorsky SH-60/MH-60 Seahawk (or Sea Hawk) is a twin turboshaft engine, multi-mission United States Navy helicopter based on the United States Army UH-60 Black Hawk and a member of the Sikorsky S-70 family. The most significant modifications are the folding main rotor and a hinged tail to reduce its footprint aboard ships.

During the 1970s, the U.S. Navy began looking for a new helicopter to replace the Kaman SH-2 Seasprite. The SH-2 Seasprite was used by the Navy as its platform for the Light Airborne Multi-Purpose System (LAMPS) Mark I avionics suite for maritime warfare and a secondary search and rescue capability. Advances in sensor and avionic technology lead to the LAMPS Mk II suite being developed by the Naval Air Development Center. The Navy then conducted a competition in 1974 to develop the Lamps MK III concept which would integrate both the aircraft and shipboard systems. The Navy selected IBM Federal Systems to be the Prime systems integrator for the Lamps MK III concept.

Since the SH-2 was not large enough to carry the Navy’s required equipment a new airframe was required. In the mid-1970s, the Army evaluated the Sikorsky YUH-60 and Boeing Vertol YUH-61 for its Utility Tactical Transport Aircraft System (UTTAS) competition. Navy based its requirements on the Army’s UTTAS specification to decrease costs from commonality to be the new airframe to carry the Lamps MK III avionics. Sikorsky and Boeing-Vertol submitted proposals for Navy versions of their Army UTTAS helicopters in April 1977 for review. The Navy also looked at helicopters being produced by Bell, Kaman, Westland and MBB, but these were too small for the mission. In early 1978 the Navy selected Sikorsky’s S-70B design, which was designated “SH-60B Seahawk”.

IBM was the prime systems integrator for the Lamps MK III with Sikorsky as the airframe manufacturer. The SH-60B maintained 83% commonality with the UH-60A. The main changes were corrosion protection, more powerful T700 engines, single-stage oleo main landing gear, removal of the left side door, adding two weapon pylons, and shifting the tail landing gear 13 feet (3.96 m) forward to reduce the footprint for shipboard landing. Other changes included larger fuel cells, an electric blade folding system, folding horizontal stabilators for storage, and adding a 25-tube pneumatic sonobuoy launcher on the left side. An emergency flotation system was originally installed in the stub wing fairings of the main landing gear; however, it was found to be impractical and possibly impede emergency egress, and thus was subsequently removed. Five YSH-60B Seahawk LAMPS III prototypes were ordered. The first YSH-60B flight occurred on 12 December 1979. The first production SH-60B made its first flight on 11 February 1983. The SH-60B entered operational service in 1984 with first operational deployment in 1985.

The SH-60B is deployed primarily aboard frigates, destroyers, and cruisers. The primary missions of the SH-60B are surface warfare and anti-submarine warfare. It carries a complex system of sensors including a towed Magnetic Anomaly Detector (MAD) and air-launched sonobuoys. Other sensors include the APS-124 search radar, ALQ-142 ESM system and optional nose-mounted forward looking infrared (FLIR) turret. Munitions carried include the Mk 46, Mk 50, or Mark 54 Lightweight Torpedo, AGM-114 Hellfire missile, and a single cabin-door-mounted M60D/M240 7.62 mm (0.30 in) machine gun or GAU-16 .50 in (12.7 mm) machine gun.

A standard crew for a SH-60B is one pilot, one ATO/Co-Pilot (Airborne Tactical Officer), and an enlisted aviation warfare systems operator (sensor operator). The U.S. Navy operated the SH-60B in Helicopter Anti-Submarine Squadron, Light (HSL) squadrons. All HSL squadrons were redesignated Helicopter Maritime Strike (HSM) squadrons and transitioned to the MH-60R between 2006 and 2015.

After the SH-60B entered service, the Navy conducted a competition to replace the SH-3 Sea King. The competitors were Sikorsky, Kaman and IBM (avionics only). Sikorsky began development of this variant in March 1985. In January 1986, seven SH-60Fs were ordered including two prototypes (BuNos 163282/3). The first example flew on 19 March 1987. The SH-60F was based on the SH-60B airframe, but with upgraded SH-3H avionics.

The SH-60F primarily served as the carrier battle group’s primary antisubmarine warfare (ASW) aircraft. The helicopter hunted submarines with its AQS-13F dipping sonar, and carried a 6-tube sonobuoy launcher. The SH-60F is unofficially named “Oceanhawk”. The SH-60F can carry Mk 46, Mk 50, or Mk 54 torpedoes for its offensive weapons, and it has a choice of fuselage-mounted machine guns, including the M60D, M240D, and GAU-16 (.50 caliber) for self-defense. The standard aircrew consists of one pilot, one co-pilot, one tactical sensor operator (TSO), and one acoustic sensor operator (ASO). The SH-60F was operated by the U.S Navy’s Helicopter Antisubmarine (HS) squadrons until they were redesignated Helicopter Sea Combat (HSC) squadrons transitioned to the MH-60S. The last HS squadron completed its transition in 2016.

The HH-60H was developed in conjunction with the US Coast Guard’s HH-60J, beginning in September 1986 with a contract for the first five helicopters with Sikorsky as the prime contractor. The variant’s first flight occurred on 17 August 1988. Deliveries of the HH-60H began in 1989. The variant earned initial operating capability in April 1990 and was deployed to Desert Storm with HCS-4 and HCS-5 in 1991. The HH-60H’s official DoD and Sikorsky name is Seahawk, though it has been called “Rescue Hawk”.

Based on the SH-60F, the HH-60H is the primary combat search and rescue (CSAR), naval special warfare (NSW) and anti-surface warfare (ASUW) helicopter. It carries various defensive and offensive sensors. These include a FLIR turret with laser designator, and the Aircraft Survival Equipment (ASE) package including the ALQ-144 Infrared Jammer, AVR-2 Laser Detectors, APR-39(V)2 Radar Detectors, AAR-47 Missile Launch Detectors and ALE-47 chaff/flare dispensers. Engine exhaust deflectors provide infrared thermal reduction reducing the threat of heat-seeking missiles. The HH-60H can carry up to four AGM-114 Hellfire missiles on an extended wing using the M299 launcher and a variety of mountable guns including M60D, M240, GAU-16 and GAU-17/A machine guns.

The HH-60H’s standard crew is pilot, copilot, an enlisted crew chief, and two door gunners or one rescue swimmer. Originally operated by HCS-5 and HCS-4 (later HSC-84), these two special USNR squadrons were established with the primary mission of Naval Special Warfare and Combat Search and Rescue (CSAR). Due to SOCOM budget issues the squadrons were deactivated in 2006 and 2016 respectively. The HH-60H was also operated by Helicopter Antisubmarine (HS) squadrons with a standard dispersal of six F-models and two or three H-models before the transition of HS squadrons to HSC squadrons equipped with the MH-60S, the last of which completed its transition in 2016. The only squadron equipped with the HH-60H as of 2016 is HSC-85, one of only two remaining USNR helicopter squadrons (the other being HSM-60 equipped with the MH-60R). In Iraq, HH-60Hs were used by the Navy, assisting the Army, for MEDEVAC purposes and special operations missions.

The MH-60R was originally known as “LAMPS Mark III Block II Upgrade” when development began in 1993 with Lockheed Martin (formerly IBM/Loral). Two SH-60Bs were converted by Sikorsky, the first of which made its maiden flight on 22 December 1999. Designated YSH-60R, they were delivered to NAS Patuxent River in 2001 for flight testing. The production variant was redesignated MH-60R to match its multi-mission capability. The MH-60R was formally deployed by the US Navy in 2006.

The Navy decided to replace its venerable CH-46 Sea Knight helicopters in 1997. After sea demonstrations by a converted UH-60, the Navy awarded a production contract to Sikorsky for the CH-60S in 1998. The variant first flew on 27 January 2000 and it began flight testing later that year. The CH-60S was redesignated MH-60S in February 2001 to reflect its planned multi-mission use. The MH-60S is based on the UH-60L and has many naval SH-60 features. Unlike all other Navy H-60s, the MH-60S is not based on the original S-70B/SH-60B platform with its forward-mounted twin tail-gear and single starboard sliding cabin door. Instead, the S-model is a hybrid, featuring the main fuselage of the S-70A/UH-60, with large sliding doors on both sides of the cabin and a single aft-mounted tail wheel; and the engines, drivetrain and rotors of the S-70B/SH-60. It also includes the integrated glass cockpit developed by Lockheed Martin for the MH-60R and shares some of the same avionics/weapons systems.

It is deployed aboard aircraft carriers, amphibious assault ships, Maritime Sealift Command ships, and fast combat support ships. Its missions include vertical replenishment, medical evacuation, combat search and rescue, anti-surface warfare, maritime interdiction, close air support, intelligence, surveillance and reconnaissance, and special warfare support. The MH-60S is to deploy with the AQS-20A Mine Detection System and an Airborne Laser Mine Detection System (ALMDS) for identifying submerged objects in coastal waters. It is the first US Navy helicopter to field a glass cockpit, relaying flight information via four digital monitors. The primary means of defense has been with door-mounted machine guns such as the M60D, M240D, or GAU-17/A. A “batwing” Armed Helo Kit based on the Army’s UH-60L was developed to accommodate Hellfire missiles, Hydra 70 2.75 inch rockets, or larger guns. The MH-60S can be equipped with a nose-mounted forward looking infrared (FLIR) turret to be used in conjunction with Hellfire missiles; it also carries the ALQ-144 Infrared Jammer.

The MH-60S is unofficially known as the “Knighthawk”, referring to the preceding Sea Knight, though “Seahawk” is its official DoD name. A standard crew for the MH-60S is one pilot, one copilot and two tactical aircrewmen depending on mission. With the retirement of the Sea Knight, the squadron designation of Helicopter Combat Support Squadron (HC) was also retired from the Navy. Operating MH-60S squadrons were re-designated Helicopter Sea Combat Squadron (HSC). The MH-60S was to be used for mine clearing from littoral combat ships, but testing found it lacks the power to safely tow the detection equipment.

On 6 August 2014, the U.S. Navy forward deployed the Airborne Laser Mine Detection System (ALMDS) to the U.S. 5th Fleet. The ALMDS is a sensor system designed to detect, classify, and localize floating and near-surface moored mines in littoral zones, straits, and choke points. The system is operated from an MH-60S, which gives it a countermine role traditionally handled by the MH-53E Sea Dragon, allowing smaller ships the MH-53E can’t operate from to be used in the role. The ALMDS beams a laser into the water to pick up reflections from things it bounces off of, then uses that data to produce a video image for technicians on the ground to determine if the object is a mine.

The MH-60S will utilize the BAE Systems Archerfish remotely operated vehicle (ROV) to seek out and destroy naval mines from the air. Selected as a concept in 2003 by the Navy as part of the Airborne Mine Neutralization System (AMNS) program and developed since 2007, the Archerfish is dropped into the water from its launch cradle, where its human operator remotely guides it down towards the mine using a fiber optics communications cable that leads back up to the helicopter. Using sonar and low-light video, it locates the mine, and is then instructed to shoot a shaped charge explosive to detonate it. BAE was awarded a contract to build and deliver the ROVs in April 2016. 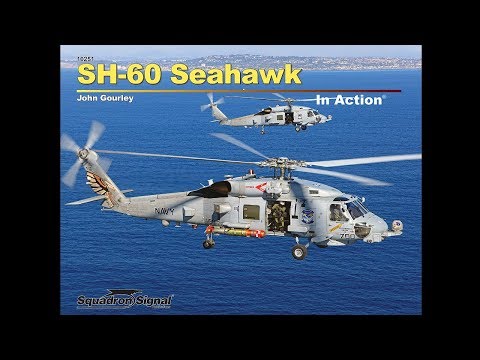 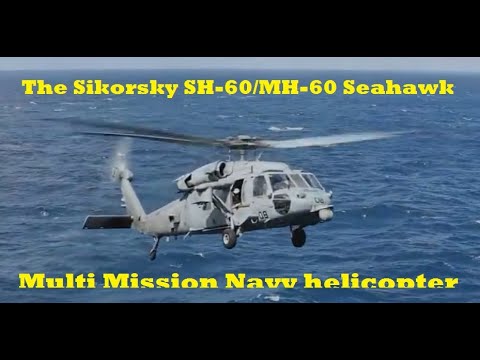 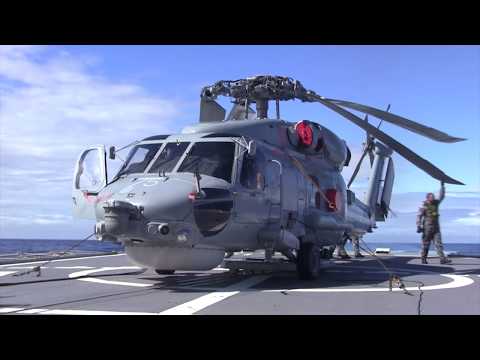 One thought on “SH-60 Seahawk”