The latest version of the Sukhoi Su-35, Su-35BM (bolshaya modernizatsiya – big modernisation), is an advanced capability multirole air superiority fighter developed from the Su-27. The aircraft has high manoeuvrability (+9g) with a high angle of attack, and is equipped with high-capability weapon systems that contribute to the new aircraft’s exceptional dogfighting capability. The maximum level speed is 2,390km/h or Mach 2.25.

The Su-35BM was unveiled at the Aerosalon MAKS air show in Moscow in August 2007 and its first flight was in February 2008. The SU-35BM entered into serial production as the Su-35S for the Russian Air Force in 2010.

The aircraft was developed, tested and introduced into serial production by the Sukhoi Design Bureau, based in Moscow, and manufactured by KNAPPO of Komsomolsk-on-Amur. Both companies are part of the Sukhoi Aviation Holding Joint Stock Company.

The Russian Air Force ordered 48 Sukhoi Su-35S jets in August 2009 with deliveries scheduled to run until 2015. Sukhoi began producing the components required for assembly of the aircraft in November 2009. An information management system integrated with onboard subsystems and a new phased array radar system with long-range aerial target detection have been installed in the aircraft, which is currently undergoing preliminary testing.

The first Su-35S aircraft was handed over to the 929th State Flight Test Centre (GLITS) for flight tests in August 2011. The Russian Ministry of Defence received six Su-35S production aircraft from Sukhoi in December 2012.

The cockpit has a central control column and is fitted with a Zvesda K-36D-3.5E zero-zero ejection seat which allows the pilot to eject at zero speed and at zero altitude.

“The front fuselage diameter of the Su-35 has been increased to accommodate the larger 900mm-diameter antenna of the Irbis-E radar.”

The aircraft has a quadruplex, digital fly-by-wire control developed by the Avionika Moscow Research and Production Complex JSC (MNPK Avionika).

The cockpit is fitted with two 230mmx305mm high-resolution MFI-35 liquid crystal displays with a multifunction control panel and a IKSh-1M head up display with a wide 20°x30° field of view.

The pilot has two VHF/UHF encrypted radio communications systems and a jam-resistant military data link system between squadron aircraft and between the aircraft and ground control. The navigation system is based on a digital map display with a strapdown inertial navigation system and global positioning system.

Compared to the Su-27 design from which it is derived, the front fuselage diameter of the Su-35 has been increased to accommodate the larger 900mm-diameter antenna of the Irbis-E radar.

High-strength, low-weight, composite materials have been used for non-structural items such as the radomes, nose wheel, door and leading-edge flaps. Some of the fuselage structures are of carbon fibre and aluminium lithium alloy.

The aircraft has 12 hardpoints for carrying external weapons and stores.

Each wing has four hardpoints – one on the wingtip and three under-wing stations. There are two hardpoints on the underside of the fuselage on the centreline and one under each engine.

“The Su-35 multirole fighter can be armed with a range of guided bombs.”

The Gryazev-Shipunov 30mm GSh-30-1 gun is fitted in the starboard wing root with 150 rounds of ammunition.

The X-band multimode phased array Irbis-E radar is supplied by Tikhomirov Scientific-Research Institute of Instrument Design (NIIP), based in Zhukovsky. Irbis-E is a high-performance radar designed for the Su-35 aircraft.

The 900mm passive phased array antenna is mounted on a hydraulic actuator for mechanical steering. The electronic steering provides azimuthal and elevation coverage of 60°. With both mechanical and electronic scanning the coverage is 120°.

The radar can detect low-observable and stealth aircraft, unmanned air vehicles and missiles with a radar cross section of 0.01m² at ranges to 90km. Radar modes include air-to-air, air-to-ground, air-to-sea, mapping, Doppler beam and synthetic aperture radar modes. It can detect and track up to 30 airborne targets with a radar cross section (RCS) of 3m² at ranges of 400km using track-while-scan mode.

The infrared search and track fire control system, OLS-35 IRST, includes an infrared sensor, laser rangefinder, target designator and television camera. The accuracy of the laser rangefinder is 5m CEP (circular error probability), to a maximum range of 20km against airborne targets and 30km against ground targets. The OLS-35 is a high-performance system with ±90° azimuthal and +60°/-15° elevation coverage.

The system’s acquisition range against a non-afterburning target is 50km forwards and 90km rearward. The Su-35 can also be fitted with a UOMZ Sapsan targeting and laser designation pod.

The aircraft is powered by two Sturn / UFA AL-31F 117S turbofan engines with thrust-vectoring nozzle control, each supplying 86.3kN thrust or 142.2kN with afterburn. The engines were developed jointly by Sukhoi, Saturn and UMPO.

The total fuel capacity is 14,350l. In order to increase the unrefuelled range and endurance compared to earlier models the Su-35 incorporates additional tailfin and fin-root tanks. The fuel tanks are of aluminium lithium construction and are located in the wings, fuselage and in the square-tip twin tailfins. The unrefuelled range on internal fuel is 1,580km.

For in-flight refuelling the aircraft is equipped with a refuelling probe on the port side of the nose. Two external fuel tanks, type PTB-2000, provide an additional 4,000l of fuel. The ferry range with two external tanks is 4,500km.

Flight tests of the Su-35 began on 18 February 2008. During high-speed ground tests in April 2009, the third prototype of the Su-35 programme crashed at Komsomolsk-on-Armur. The crash damaged the new NIIP Irbis-E radar set installed on Su-35. 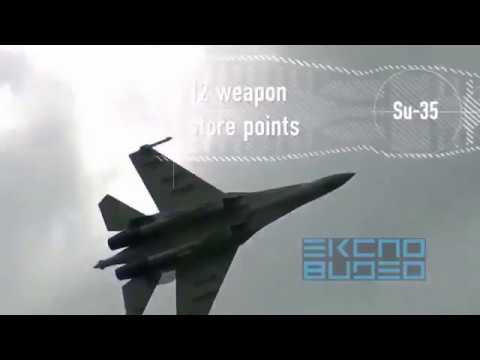 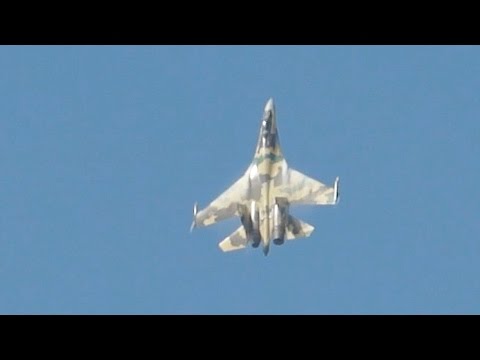