The Ticonderoga class are a class of guided-missile cruisers in service with the US Navy. 27 Ticonderoga Class (CG 47 – CG 73) Aegis guided-missile cruisers were built between 1983 and 1994 by Ingalls Shipbuilding at Pascagoula, Mississippi and Bath Iron Works (a General Dynamics Company) in Bath, Maine, US. Ingalls Shipbuilding is now part of Huntington Ingalls Industries. Northrop Grumman spun off its shipbuilding businesses into a new company Huntington Ingalls in March 2011.

22 ships are operational, 11 in the US Navy Atlantic Fleet and 11 in the Pacific Fleet, two of which are based in Japan in the US Naval Forces Base at Yokosuka.

In February 2008, USS Lake Erie (CG 70) successfully fired a Standard SM-3 missile intercepting a non-functioning National Reconnaissance Office satellite before it entered the earth’s atmosphere. The object was to rupture the satellite’s fuel tank to dissipate the hazardous fuel. The satellite, travelling at 17,000mph was hit 247km over the Pacific Ocean.

BAE Systems won a contract worth $175m to upgrade the US Navy’s USS Vicksburg (CG 69) in January 2020. The upgrade of the guided-missile cruiser represents the final phase of work under the modernisation programme with completion expected in July 2021. USS Gettysburg (CG 64) is also undergoing modernisation and the service lives of both the cruisers will be increased to allow them to operate until the mid-2030s.

In June 2020, Lockheed Martin was awarded a contract that provides funds for the delivery of Aegis weapon system upgrades to USS Ticonderoga and supports Aegis development for the US and its allies.

The Ticonderoga class, similarly to the Arleigh Burke-class guided-missile destroyers, is equipped with the Aegis Combat System, which integrates the ship’s electronic sensors and weapons systems to engage anti-ship missile threats.

“Two four-cell launchers for the Boeing Harpoon surface-to-surface missile system are installed on the gun deck.”

The Aegis system has a federated architecture with four subsystems – the AN/SPY-1 multifunction radar, the command and decision system (CDS), Aegis display system (ADS) and the weapon control system (WCS).

Aegis Baseline 7.1 is based on COTS (commercial-off-the-shelf) computer architecture and includes a new AN/SPY-1D(V) radar with enhanced electronic countermeasures and more effective capability in littoral environments.

Baseline 7.1 was certified by the USN in September 2005 on board Arleigh Burke destroyer USS Pinkney (DDG 91). In December 2007, the USN approved the latest Aegis upgrade Aegis Open Architecture. Work on the vessel began in February 2008 under the US Navy’s cruiser modernisation programme (CMP). USS Bunker Hill (CG 52) was the first vessel to be equipped with the Lockheed Martin’s open architecture Aegis Weapon system in 2008 and underwent operational trials of its full combat system in 2009. All 22 Ticonderoga cruisers were fitted with Aegis Open Architecture by 2018.

In the anti-ship role, the missile uses inertial guidance and active / passive radar homing to a range of 250nm. The land-attack version (TLAM) uses a Tercom (terrain comparison) and inertial navigation system (TAINS). The range is up to 2,500km.

As part of the US Navy cruiser conversion programme, the mk41 launchers were upgraded with new Lockheed Martin AN/ALQ-70 computers and the ability to launch Evolved Sea Sparrow Missiles (ESSM) and Tactical Tomahawk (Block IV) missiles.

ESSM, which entered service with the USN in 2004, was developed by Raytheon with an international cooperative of ten NATO countries and is designed to counter high-speed anti-ship missiles.

It has the same semi-active radar guidance and warhead as the Seasparrow but has a new rocket motor and tail control to provide increased speed, range and manoeuvrability. Tactical Tomahawk, which entered service in September 2004, has the capability for mission planning on board the launch vessel, in-flight targeting and loitering.

Two four-cell launchers for the Boeing Harpoon surface-to-surface missile system are installed on the gun deck at the stern of the ship. Harpoon has a range of up to 125km.

The ships are armed with the Raytheon Standard Missile 2MR surface-to-air missile, which uses command and inertial guidance and semi-active radar homing and have a range of 70km. 60 missiles are carried for each of the two mk41 VLS. In November 2002, the Standard Missile SM-3 developed by Raytheon successfully intercepted a ballistic missile in space from USS Lake Erie (CG 70).

The SM-3 is designed to intercept ballistic missiles outside the earth’s atmosphere and will form part of the US Navy’s Sea-based Midcourse Defense (SMD). The missile has new GPS/INS (global positioning / inertial navigation) guidance and kinetic warhead. Raytheon began deliveries of the SM-3 in December 2004. Lockheed Martin has developed the Aegis ballistic missile defence (BMD) 3.0 capability for the Aegis combat system to engage ballistic missiles with the SM-3 missile.

A triple 324mm-tube torpedo launcher is capable of launching the mk46 mod 5 torpedo and mk50 torpedo from ATK (Alliant TechSystems). The mk46 anti-submarine torpedo has a range of 10km and the mk50 has a range of 15km.

The Lockheed Martin Vertical Launch ASROC is armed with the mk50 or mk46 torpedo and is launched from the mk41 VLS.

Two Raytheon Phalanx mk15 close-in weapon systems are installed. Phalanx has a 20mm/53-calibre six-barrel gun capable of firing 3,000 rounds a minute to a target range of 1.5km. Phalanx Block 1B is fitted with a thermal imager and can fire 4,000 rounds a minute.

The ship is equipped with the AN/SLQ-25 Nixie towed torpedo decoy from Argon ST (formerly Sensytech) of Newington, Virginia, and six to eight mk36 six-barrel launchers for SRBOC from Lockheed Martin Sippican, which fire infrared decoys and chaff. The ship’s electronic support measures and countermeasures system is the Raytheon AN/SLQ-32.

Ticonderoga vessels, along with USN frigates and LPDs, are being fitted with the BAE Systems Australia mk53 Nulka active missile decoy system. Nulka is a hovering rocket system, which seduces incoming missiles away from the ship. Nulka was developed by the Australian Defence Science and Technology Organisation in Canberra and Lockheed Martin Sippican in Massachusetts.

The ship’s propulsion system consists of four LM 2500 gas turbine engines from General Electric, which provide 86,000hp. The engines drive two shafts with controllable-pitch propellers. The propulsion system provides a maximum speed over 30k. At an economical speed of 20k, the ship has a range over 6,000 miles. 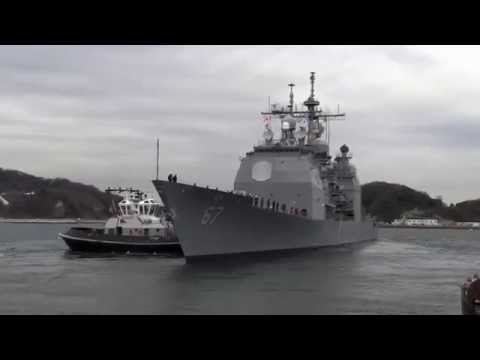 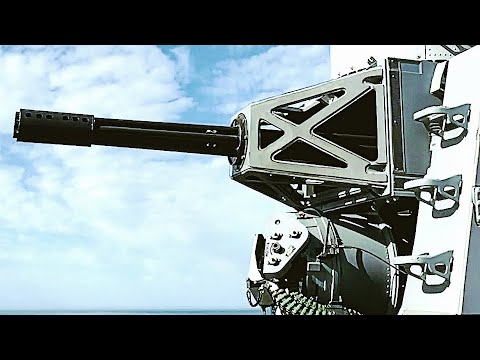 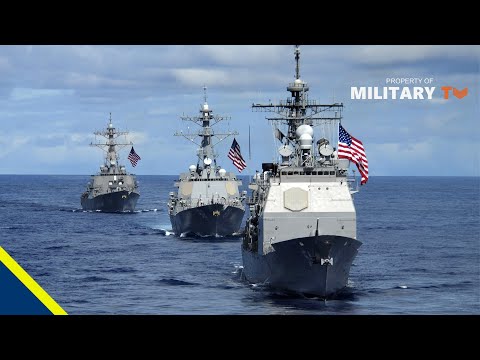 One thought on “Ticonderoga Class Cruiser”