The Type 212 submarine is capable of long-distance submerged passage to the area of operation. The German Navy ordered four of the submarines.

Type 212 is being constructed by Howaldtswerke-Deutsche Werft GmbH (HDW) of Kiel, a part of Thyssenkrupp Marine Systems (TKMS) and Thyssen Nordseewerke GmbH (TNSW) of Emden. HDW was responsible for the bow sections and TNSW for the stern section. HDW assembled the first and third vessels, TNSW the second and fourth. U31, the first of the class, was launched in March 2002 and commissioned in October 2005.

In September 2006, the German Navy ordered two additional Type 212 submarines. The first of the two U35 was delivered in November 2011 and the second was delivered in 2013. The new vessel has improved network-centric communications, combat systems and sensors. The construction of the first vessel began in August 2007.

In August 2008, the Italian Government placed an order for two additional submarines of the class, Pietro Venuti and Romeo Romei. The submarines were commissioned in July 2016 and May 2017 respectively.

Israel’s Navy ordered six Dolphin-Class Type 212 submarines, of which five were delivered by 2014. The sixth submarine was ordered in May 2011 with delivery scheduled for 2020.

Type 212 is equipped with a highly integrated command and weapons control system, which interfaces with sensors, weapons and navigation systems.

The system is based on a high-performance databus and a distributed computer system, the basic command and weapons control system (basic CWCS) supplied by Kongsberg Defence & Aerospace of Norway under the trade name MSI-90U.

The second batch of two vessels for the German Navy will be fitted with the Callisto B submarine communication system supplied by Gabler Maschinenbau.

There are six 533mm torpedo tubes in two groups of three, as well as 12 torpedoes or 24 mines. Type 212 is equipped with a water ram expulsion system for torpedo launches. The submarine is equipped with the DM2A4 heavyweight torpedo weapon system from Atlas Elektronik.

U33 of the German Navy is the platform for a series of flight tests of the fibre-optic-guided IDAS submarine-launched missile developed by Diehl BGT Defence, HDW and Kongsberg Defence & Aerospace. In June 2008, the IDAS missile designed to protect against anti-submarine helicopters was successfully launched from the torpedo tubes of the submerged U33 submarine.

EADS Systems & Defence Electronics and Thales Defence were awarded a contract to develop the FL1800U electronic warfare system for U212 submarines of the navies of Germany and Italy. The 1800U is a submarine version of the FL1800 S-II, which is in service on the Brandenburg and Bremen Class frigates.

A consortium led by ATLAS Elektronik and ELAC was responsible for the development of the TAU 2000 torpedo countermeasures system. TAU 2000 has four launch containers, each with up to ten discharge tubes equipped with effectors.

The effectors are small underwater vehicles, similar in appearance to a torpedo. They are jammers and decoys with hydrophones and acoustic emitters. Multiple effectors are deployed in order to counter torpedoes in re-attack mode.

The search periscope is the Zeiss Optronik SERO 14 with an optical rangefinder, thermal imager and global positioning system. The Zeiss SERO 15 attack periscope is equipped with a laser rangefinder.

The propulsion system combines a conventional system consisting of a diesel generator with a lead-acid battery and an air-independent propulsion (AIP) system used for silent slow cruising with a fuel cell equipped with oxygen and hydrogen storage. The system consists of nine polymer electrolyte membrane (PEM) fuel cells, providing between 30kW and 50kW each.

For higher speeds, a connection is made to the high-performance lead-acid battery. An MTU 16V-396 diesel engine powers the generator from Piller GmbH for charging the battery installed on the lower of the two decks at the forward section of the submarine.

The diesel generator plant is mounted on a swinging deck platform with double elastic mounts for noise and vibration isolation. The propeller motor is directly coupled to the seven-bladed screwback propeller.

HDW developed the type 214 submarine, which is an improved and larger version of Type 212. It features eight 533mm torpedo tubes.

The Greek Navy ordered three Type 214 submarines. The first, Papanikolis (S120), was built at the HDW Kiel shipyard and was launched in April 2004. The vessel successfully completed a series of sea trials in September 2008.

In September 2009, the Greek Government refused to accept delivery of the vessel and a commissioning date is uncertain. The vessel successfully completed a further series of sea trials in September 2008.

The Hellenic Shipyards is building the second (Pipinos S121, launched November 2006) and third (Matrozos 122) vessels at Skaramanga. Hellenic Shipyards was acquired by HDW (now part of ThyssenKrupp Marine Systems) in May 2002. The fourth vessel, Katsonis (S123), was ordered by Greece in June 2002 and commissioned in 2016.

In July 2009, Turkey signed a contract for the co-production of six Type 214 submarines. According to the contract, HDW delivers six material packages to build type 214 submarines at Gölçük Naval Shipyard (GNSY) in Turkey. All submarines are equipped with an air-independent propulsion system.

Turkish Navy identified five major faults in the Type 214 submarine and introduced its own solutions to the design verified by TKMS. Hence, the Turkish submarines will be different in dimensions than the Type 214 of other countries.

In September 2009, Atlas Elektronik was awarded a contract to supply ISUS 90-61 combat systems for six Korean submarines. In July 2010, Thales and Samsung Thales were selected by HDW to provide an X-band Satcom terminal to equip the six type 214 submarines built for the Republic of Korea Navy.

Type 214 has an increased diving depth of more than 400m due to improvements in the pressure hull materials. Hull length is 65m and displacement is 1,700t. Four of the eight torpedo tubes are capable of firing missiles.

Type 214 submarines for the Hellenic Navy are armed with the WASS (Whitehead Alenia Sistemi Subacquei) Black Shark heavyweight torpedo. The Black Shark is a dual-purpose, wire-guided torpedo, which is fitted with Astra active / passive acoustic head and a multitarget guidance and control unit, incorporating a counter-countermeasures system. It has an electrical propulsion system based on a silver oxide and aluminium battery.

Performance of the AIP system was increased with two Siemens PEM fuel cells, which produce 120kW per module and give the submarine an underwater endurance of two weeks. A hull shape, which was further optimised for hydrodynamic and stealth characteristics, and a low-noise propeller combine to decrease the submarine’s acoustic signature.

The integrated sensor underwater system ISUS 90 from ATLAS Elektronik integrates all sensors, command and control functions on board the submarine. BAE Systems provides the link 11 tactical data link. The sensor suite of the U214 submarine consists of the sonar systems, an attack periscope and an optronic mast. The submarine’s electronic support measures system and global positioning system sensors are also installed on the optronic mast. 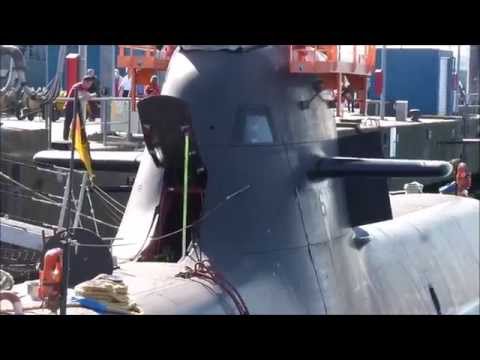 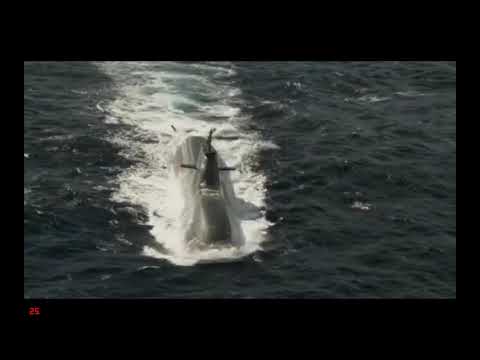 One thought on “Type 212 Class Submarine”