The UK Royal Navy’s new Type 45 destroyers have replaced the old Type 42 destroyers that were in service since 1978. Six Type 45 destroyers were contracted. The requirement was for 12 vessels of the class, but in July 2004, the UK Ministry of Defence announced this would be cut to eight.

This was further reduced in June 2008 to the six previously contracted. The destroyers entered service by 2013.

All ships were assembled and launched at BAE’s Scotstoun shipyard. VT Shipbuilding in Portsmouth built the bow sections, masts and funnels for all six ships.

The production of the first-of-class ship, HMS Daring (D32), began in March 2003 and it was launched on 1 February 2006 at Scotstoun. The Daring Class destroyer began first stage sea trials in July 2007, which concluded in August 2007. The five-week second stage sea trials commenced in April 2008, focusing on weapon systems, radar and endurance trials.

The vessel completed contractor’s trials in September 2008. Daring was formally handed over to the UK Ministry of Defence in December 2008 and the vessel arrived at its homeport of Portsmouth in January 2009 for further trials prior to commissioning in July 2009.

“The UK Royal Navy’s new Type 45 destroyers have replaced the old Type 42 destroyers that were in service since 1978.”

The construction of the second vessel, HMS Dauntless (D33), began in August 2004 and it was launched on 23 January 2007. The vessel began sea trials in November 2008 and was commissioned in June 2010. The vessel entered service with the Royal Navy in November 2010.

The UK withdrew from participation in the tri-national Project Horizon / common new-generation frigate (CNGF) programme for the UK, France and Italy and the project was terminated in October 1999.

The Type 45 programme gained benefit from work done on Project Horizon, for example, the principal anti-aircraft missile system (PAAMS) weapon system and some of the internal architecture of the ship. In March 2018, UK MoD awarded a £160m ($226.5m) contract to BAE Systems for power and propulsion system of Type 45 destroyers as a part of power improvement project (PIP).

The ship has a displacement of approximately 8,000t. The designed top speed of the vessel is over 30k, while the range is more than 7,000nm.

Mission details of the destroyer

The main mission of Type 45 anti-air warfare destroyer is to provide local area fleet defence with long-range radar and wide-area defence capability. The ship’s combat systems also have the capability to control aircraft and coordinate the anti-air warfare operations of the task force.

The Type 45 destroyer is equipped with long-range weapon systems to intercept air threats, including super-agile manoeuvring missiles with re-attack modes. The UK PAAMS defends the ships from missiles approaching individually or in salvos and is capable of controlling a large number of airborne missiles simultaneously. The Type 45 can also accommodate cruise missiles such as the Tomahawk and anti-ballistic missiles if a requirement is identified in future.

The Type 45 destroyer can operate a helicopter up to the size of a Royal Navy Merlin helicopter but initially operates with Lynx HMA 8 helicopters armed with Stingray torpedoes.

The primary weapon system of the Type 45 destroyer is the principal anti-aircraft missile system (PAAMS). PAAMS is a tri-national programme, involving France, Italy and the UK. The contract for series production was placed in November 2003.

The prime contractor is Europaams SAS, a joint venture company two-thirds owned by Eurosam (MBDA and Thales) and one-third by the UKAMS subsidiary of MBDA.

The missiles used for PAAMS are the Aster 15 and the Aster 30. The Type 45 carries up to 48 Aster 15 and Aster 30 missiles. The Aster missile carries an inertial computer with datalink, an active J-band Doppler radar seeker and 15kg warhead.

Each face of the array carries 2,500 gallium arsenide transmit and receive modules, with an output of 25kW. BAE Systems reconfigured Sampson to produce a near-spherical design, which retains the two arrays internally.

Modes of operation include long and medium-range search, surface search, high-speed horizon search and high-angle search and track. Sampson uses digital adaptive beamforming, which makes it highly resistant to electronic countermeasures. The Sampson radar completed installation on the HMS Daring foremast in April 2007 in preparation for PAAMS integration in 2008.

In June 2011, BAE Systems was awarded a £46m contract to provide technical support and maintenance for the Sampson multi-function radars (MFR) onboard six Type 45 destroyers.

PAAMS uses a DCN Sylver A50 vertical launcher with eight cells. Type 45 has six Sylver VLS. The command and control system was supplied by UKAMS, although Thales Airsys built some of the core elements.

The ships are fitted with the 114mm mk8 mod 1 medium-calibre gun system for shore bombardment and two 30mm guns. There is provision for the installation of two close-in weapons systems such as the Raytheon Phalanx.

Ultra Electronics (with EDO Corporation of the USA) was selected to provide the Type 45’s surface ship torpedo defence (SSTD) system, which included the MFS-7000 bow-mounted medium-frequency sonar, a development of the sonar supplied by EDO to the Brazilian Navy.

The system provides automatic warning of a torpedo attack and tactical advice on ship manoeuvres and the deployment of decoys to defeat the threat.

The Type 45 destroyer has a flight deck and hangar to support the operations of a single helicopter. The flight deck can accommodate either a Lynx HMA8 or Merlin EH101 HAS 1 helicopter armed with anti-ship missiles and anti-submarine torpedoes.

The RESM is developed from Racal’s Outfit UAT but with new signal processing and emitter identification technology.

The recuperator recovers energy from the exhaust gases to increase fuel efficiency. Each engine provides 25MW.

The engines were built by a team led by Rolls-Royce and Northrop Grumman. Alsthom Power Conversion provided other elements of the power and propulsion system, including the electric propulsion motors. 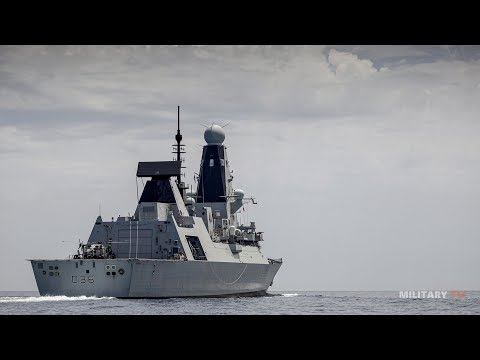 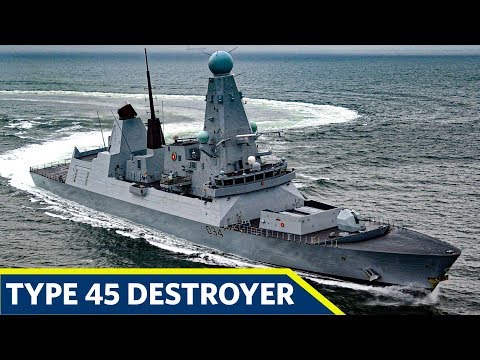 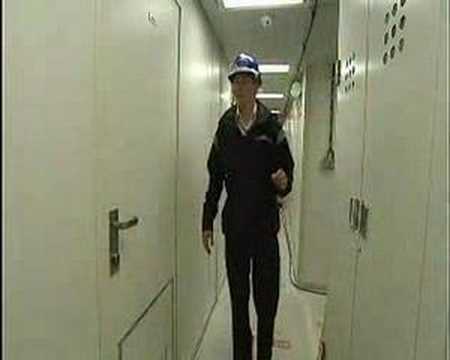