The Wasp-class is the US Navy’s large-deck multipurpose amphibious assault ship. A total of eight Wasp-class ships were built and all eight are active as of June 2020.

In April 2002, the US Navy awarded a contract to Northrop Grumman for the construction of one additional Wasp-class ship, USS Makin Island (LHD 8), which features a new gas turbine propulsion system (instead of the steam propulsion of the other vessels), comprising two GE LM2500+ turbines, rated at 35,000shp and six diesel-electric generators with a controllable pitch propeller.

“The ship can ballast over 15,000t of seawater to allow craft to float into and out of the well deck.”

It marked the first military application for the LM2500+, which is in operation on a number of commercial vessels. Other improvements are to the weapon systems and installation of a new advanced machinery control system. The keel for Makin Island was laid in February 2004. It was launched in September 2006 and began contractor’s sea trials in December 2008. The ship was delivered to the US Navy in April 2009 and commissioned in San Diego in October 2009.

In July 2005, Northrop Grumman was awarded a contract for the development of the USS America (LHA 6) amphibious assault ship, which is a variant of the LHD 8 with the capability to support the F-35B STOVL joint strike fighter and the V-22 Osprey tiltrotor.

In place of a well deck, LHA 6 has an extended hangar deck with two overhead cranes.

The future MPF will be crucial for the USN’s ‘sea basing’ concept. Seabasing refers to the ability to conduct and support marine landings from ships at sea, rather than from land bases. The vessel was named USS America (LHA 6) in June 2008. The keel was laid in July 2009 and the ship was commissioned in October 2014 to replace the LHA 1 Tarawa class of amphibious assault ships.

America is the lead ship in the America-class of amphibious assault ships. Keel for the second ship in the class, Tripoli (LHA 7), was laid in June 2014 and the ship delivered to the US Navy in February 2020.

Keel-laying ceremony of the third ship, Bougainville (LHA 8), was held in March 2019 and the ship is expected to be delivered to the US Navy in 2024.

The ship has two deck edge aircraft elevators, each with a lifting capacity of 75,000lbs. The elevators fold for transit through the Panama Canal and are the largest folding elevators in the navy.

A Sperry Marine integrated bridge system (IBS), which provides computerised integrated navigation, steering and control, is to be fitted to Iwo Jima and may be retrofitted to previous vessels of the class.

The ship’s assault support system synchronises the simultaneous horizontal and vertical flow of troops, cargo and vehicles throughout the ship for insertion of forces ashore via helicopters, landing craft and amphibious vehicles.

Six 12,000lb-capacity cargo elevators transport material from cargo holds to staging areas for loading. Cargo to be loaded on board landing craft within the well deck is moved via a monorail system. This system consists of 2,900ft of track in a six-track layout. The five 32ft monorail trains each have a capacity of 6,000lb and a speed of up to 600ft a minute (6.8mph).

Off the beach, landing craft is launched and recovered through the very large stern gate, which opens the well deck to the sea. The well deck is 267ft long, 50ft wide and is designed specifically for the fly-in / fly-out capabilities of the air-cushioned landing craft (LCAC).

The LHDs carry three LCACs. The LCAC is a high-speed landing craft capable of carrying a 60t to 75t payload. It can carry payloads such as an M1A1 tank and 5t trucks at a speed of more than 40k (73.6km/h).

The air cushion allows the LCAC to reach more than 70% of the world’s coastline. Conventional landing craft can land at only 15% of coasts.

To launch and recover conventional landing craft, the ship can ballast over 15,000t of seawater to allow these craft to float into and out of the well deck. 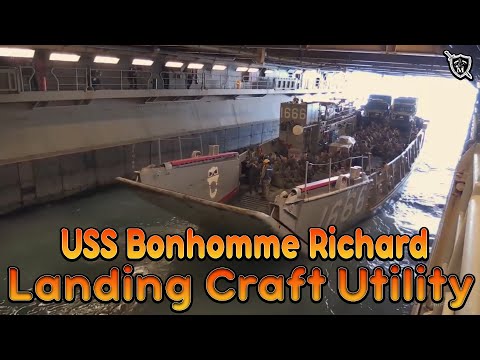 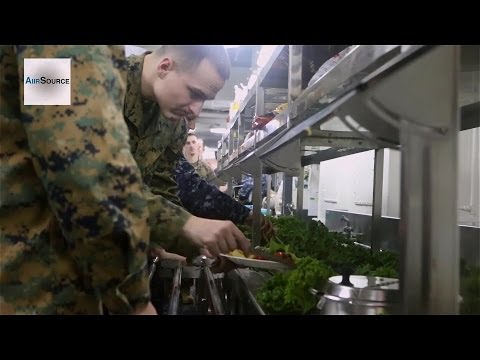 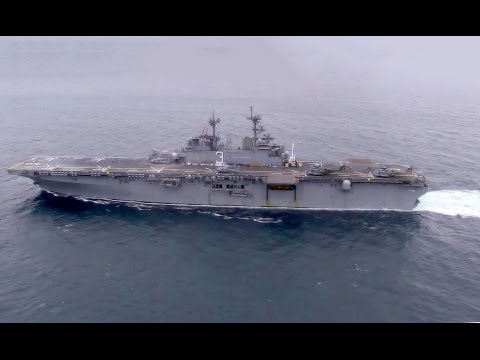